With the Star64 and VisionFive 2 single board computers, we’ve already got two hardware platforms based on the StarFive JH7110 quad-core RISC-V processor, but somehow we did not get the detailed specifications of the new processor, and some details such as the presence of AI accelerators or exact PCIe specifications were lacking.

Some documentation for the StarFive JH7110 processor has been released and answers some of those questions. It’s actually an SoC with six RISC-V cores, of which four 64-bit RISC-V cores run the main OS, plus a 64-bit RISC-V monitoring core, and a 32-bit RISC-V real-time core. The AI accelerators found in the JH7100 (Neural Network Engine and NVDLA) appear to be gone for good, and there are two 1-lane PCIe 2.0 interfaces up to 5 Gbps each. 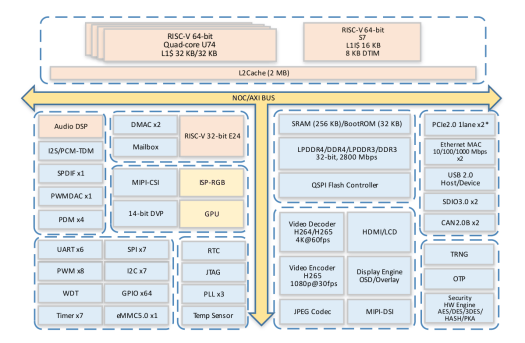 Supported operating systems include Linux, VxWorks, and other RTOS.

Target applications for the StarFive JH7110 processor include single board computers, home NAS, routers with software routing, Smart Home appliances, industrial robots, drones, and video surveillance applications. The documentation website comes with a product brief and a datasheet, and a hardware design reference plus a software developer guide are also in the works.

That’s a lot of great features on one SoC. Nice.

So what stopped them going with PCIe 3x ?

Absolutely. We tend to forget about the internal bus sizes and cache bandwidths, but not so long ago a reputable vendor (NXP) managed to fail their iMX6 with GbE being limited to 470 Mbps just due to internal busses. Now we’re speaking about speeds that are 20 times larger and this requires careful handling.

More some other design flaw. More than a decade old i.MX6 featured also a single Gen2 PCIe lane (though lacking DMA support) and some cluster guys measured +350 MB/s which translates to 2800 Mbit/sec or 3500 Mbit/sec whether you want to apply 8b10 coding or not.

Well things are getting crazy, the other company SiFive has agreed to sell OpenFive, including their custom SoC IP to Alphawave IP. The design smarts need and IP for good SoC are out there.

seen with system bus documentations, there’s a ~50% share for commercialized licensing for Risc-V cores, while the other half is open sourced for distribution w/o licensing cost for the cores some, Risc-V cores often combined with ARM system environment (AMBA -> [bus] AHB, APB, [interface (bus, protocol)] AXI …..) with ARM providing “the software ecosystem, comprising development tools, operating systems, drivers, and applications guaranteed to run on compatible CPUs.” (including experience from billion devices) or combined with custom system environment from scratch (e.g. OpenCore’s (Silicore) Wishbone bus, IBM CoreConnect) How much of “free” SoCs (with Risc-V, being free cores) are… Read more »

” New Intel Pathfinder for RISC-V platform enables developers to create their own products using RISC-V cores and IP from the partner ecosystem, instantiate on FPGA and simulator platforms, and run operating systems and tool chains within a unified IDE. “
embedded.com

Some documentation for the StarFive JH7100 processor has been released

If this chip’s components could all be used from one RTOS, that woild be amazing for my use cases.

Not that simple, more complex a multi level market.

Designs seem to embrace off the shelf Vivante and PowerVR; I am not sure how these 2 don’t meet your categorization of “open source GPU drivers” since they both have Mesa contributions – in PowerVR’s case I would encourage them to continue along the path despite cynicism in the past week on this forum.

If you were expecting some sort of Larabee/Cell RiscV-specific GPU solution, I’m afraid that went awry when Libre-SOC chose OpenPOWER.

Actually part of what to expect was known for about a year. JH7110 was originally planned to be a heart of BeagleV, before they started to redesign it from scratch. And because of that overall ideas (amount of cores, frequency, what GPU, amount of PCIe lanes) were public since approx. March 2021.

The removal of the neural processing blocks is really not a big deal, because the two PCIe 2 lanes allow the user to pop in a Coral TPU* (which has a way better software ecosystem than most SoC specific NPUs). I think it was a smart move to focus on IO rather than a flashy NPU block. Tangentially, I was a little disappointed to see that the video encoder/decoder blocks only support MPEG-LA codecs (no VP8/9 or AV1 support). Oh well those are not even going to be used for all use cases. I wonder if the CPU can decode… Read more »