Neuromorphic AI accelerator chips relying on spiking neural networks (SNN), which we’ve seen from companies such as Innatera or Brainchip, will be used more and more in the future as they provide much higher efficiency compared to traditional deep neural networks (DNN) solutions.

Intel is also working on SNN, and recently announced the Loihi 2 second-generation neuromorphic research chip with up to 1 million neurons (the human brain has 86 billion of those on average) that delivers up to 175x lower energy to learn a new object instance with similar or better speed and accuracy compared to conventional methods running on a central processing unit (CPU). 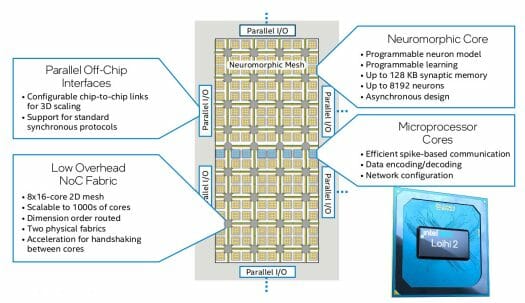 A side-by-side comparison between Loihi and Loihi 2 can be found in the table below. 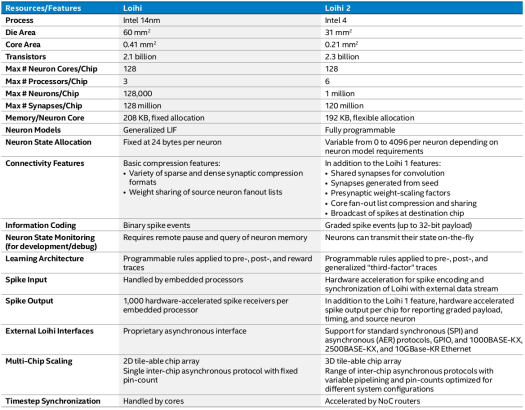 As a side note, Loihi 2 should be on the first chip manufactured with Intel 4 manufacturing process. Intel says it used “a preproduction version of the Intel 4 process to address the need to achieve greater application scales within a single neuromorphic chip”.

The Loihi 2 neuromorphic chip works with the Lava open-source software framework designed to develop applications for neuromorphic hardware architectures. It currently works on CPUs and Loihi chips, but its compiler and runtime are open to extension for other architectures.

Most people will access Loihi 2 through the Neuromorphic Research Cloud giving access to shared systems that currently include the “Oheo Gulch” single-chip system connected to an Aria 10 FPGA for early evaluation, and will soon be joined by the “Kapoho Point”, a compact (4×4-inch) stackable 8-chip system with Ethernet.

Loihi is said to consume far less than 1 watt of power compared to the tens to hundreds of watts that standard CPU and GPU solutions consume, so this type of neuromorphic AI accelerator may eventually bring the power of datacenter hardware to robots, autonomous vehicles, and so on, and deliver similar performance at much lower power consumption and latency since the processing can be done on the device itself. Lower-end neuromorphic chips will leverage SNN’s efficiency in battery-powered sensors with built-in AI instead.

Additional information may be found on the Intel website, the press release, and a 7-page technology brief with further technical details.