While Khadas VIM4 board has just been launched, the earlier Khadas VIM3 SBC has the advantage of featuring a 5 TOPS NPU that’s being leveraged by Lilium Robotics for their humanoid robots, notably the Lily Delta V7 robot cat girl doll using the Amlogic A311D board to control motors and provide AI features such as face and object detection and tracking.

The Delta V7 is offered as an Android kit running Linux (Android refers to humanoid robot here) with a full motorized body kit, a head with a dual camera and sound system, accessories like a dress, wig, cat ears and tail, and other features that are more geared towards the adult crowd… 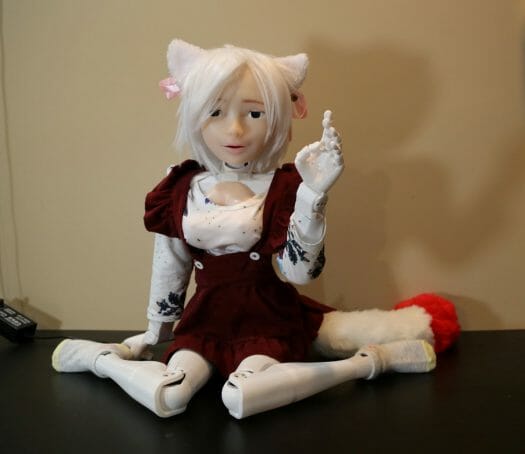 The video below shows how the VIM3 is integrated into the head of the robot with other parts and explains the main task of the NPU is to accelerate object detection and tracking.

The company says only basic animations/positioning are available for now, but future software updates will unlock more functions such as crawling and object manipulation. Walking won’t be possible with this robot. The Python code for audio, vision, the user interface, and motion control can be found on Github, and there’s a code walkthrough on YouTube that explains how this works. The Delta V7 robot cat girl doll can also be used as a chatbot and read audiobooks, and the most advanced chatbot relies on GPT-3 which needs to run on a more powerful computer due to the processing required.

Three options are available with Khadas VIM3: the advanced head only for $400, the Android kit for $2,500, and the fully-assembled kit for $5,000 which you’ll find on the company’s shop (may not be safe for work depending on where you live or work, but IMHO there’s nothing too outrageous).

I would also like to thank theguyuk for just the tip.

Real talk though, home robot technology still sucks, humanoid or otherwise. Improving the AI, which will eventually use 3D neuromorphic chips, could be more straightforward than creating dexterous hardware that can navigate human environments.

>(may not be safe for work depending on where you live or work,
>but IMHO there’s nothing too outrageous).

Dunno, I wouldn’t want to be caught by the boss looking at the illustrations of how to have naughty time with what an adult toy that seems to be designed to simulate a child they have on that site. Now I feel dirty and have a feeling my IP address is on a watch list.

>Thanks to theguyuk for the tip.

Does he have a PO box I can send the bill for get my retinas sand blasted?

Yeah, that’d be illegal to own in a lot of countries – “prototype” or not – it’s a sex doll that looks like a small child.

Indeed and for any vendor to attach their name to this is at best seriously creepy.

I don’t think that this does Jean-Luc any favours either by even mentioning it.

Granted that some nations are less inhibited when it comes to pleasures of the adult flesh but this, I am afraid, crosses a very dark line.

I certainly won’t ever purchase a product from Khadas based on this kind of commercial activity.

I certainly won’t ever purchase a product from Khadas based on this kind of commercial activity.

Khadas may not even know their board was used in that robot.

This is the aspect of what you have published that you are focussing on?

If the twitter mobs get a sniff of this article, they are likely to give you publicity that you really don’t want.

I’m out of here for good.

I wanna see some evidence to back up your claims, including a legally valid definition of a “sex doll” that applies to the doll here and any laws that explicitly make such dolls illegal even in private settings.

I mean, from where I stand, all I see is projections and knee-jerk reactions.

I don’t know about looking like a child – the thing looks too fake to make such a resemblance to me. But that’s my personal opinion.

I can imagine that large sex dolls have a lot of practical downsides – they’re harder to handle or keep hidden, more expensive, weigh more etc, so there seems to be logical reasons to prefer something smaller unrelated to sexual preference.
Of course, the downside to a small doll is that the SJW crowd will lynch you.

I certainly can’t see a child there, no matter how much I squint. It just looks like a weird doll and not even one that’d be comfortable to hold in one’s arms or anything — I can’t be arsed to watch the video, but it looks to me as if those arms and legs are just plain hard plastic.

I fully agree about the sick child focus of the product. Originally I stumbled on just the head discussion video on YouTube while looking at hardware.

Khadas are hardly responsible for a use they had no intention of. What hardware are all the other talking sex bots running on? Don’t see talks of not buying that make of hardware.

This is one of those unintended consequence of technology, the dark side of tech.

Will the maker move to the more powerful RK3588, will people stop buying RK3588 products then. Or are there double standards at play.

When it comes to robots, I’m really more on R2D2 side, than C3PO. This things looks creepy as hell.