Amlogic S928X multi-core Cortex-A76/A55 8K media processor, which may have been initially known as S908X, is being showcased at ICB2022 in Amsterdam in the “SEI 8K Box” developed by SEI Robotics.

Amlogic S908X/S928X was first discovered in a roadmap in 2019 and was expected to launch by the end of 2020 at the time. But after a long wait of nearly three years, the Amlogic S928X processor is finally showing in SEI 8K box with an HDMI 2.1a 8K video interface, supports for HDR and advanced audio codecs like Dolby Atmos and DTS, and support for Smart Home functions through an IoT module with WiFi 6E, Zigbee and more. 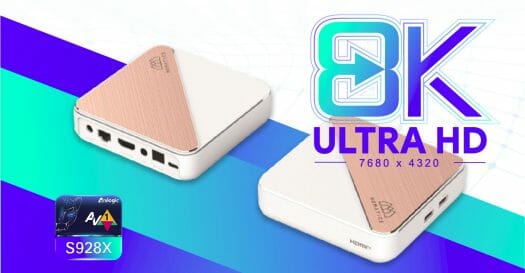 The Homatics-branded TV box can also be used as a Smart Home gateway through Google Assistant and the Homatics app. Despite the box being jointly announced by Amlogic and SEI Robotics, we have limited information about the Amlogic S928X from the IBC 2022 press release and the 2019 roadmap, since Amlogic did not feel the need to provide more details about the processor at this time. We don’t even know which operating system is running on the device, although I’d expect it to be Android 12.

The companies did not provide any available information for the box or processor.

> We don’t even know which operating system is running on the device, although I’d expect it to be Android 12.

I’m not sure actually, but looking at https://source.android.com/docs/core/architecture/kernel/android-common, it should be 5.10, but it looks like Linux 5.4 is possible as well.

Yes, I’ve seen ZTE and Skyworth, besides SEI Robotics, but just like the latter they don’t provide a lot of details.

Naturally, comparisons with the Rockchip RK3588, it’s likely natural competitor, will be good to see when we see a little more information.

You know that Dhrystone is a 100% irrelevant single-threaded benchmark from almost 40 years ago (multiplying single-threaded scores with count of CPU cores to generate ‘multi’ cores is even more stupid than still using this benchmark).

DMIPS are for marketing departments only.

Hiya, I don’t expect you to read this, or even do anything with it, but I thought I’d just offer this: It would be amazing if you could add (and use) a “Dolby Vision” tag for articles like this, oh, and to offer the option to sort the searches. 🙂

I do have a Dolby Vision tag, but I forgot to use it in this article.
https://www.cnx-software.com/news/dolby-vision/

I’m not sure it’s super useful because companies will sometimes/often copy/paste the processor specs without checking the details, and Dolby Vision may show up, but not be implemented into the product.

if it has dolby vision,everything will be fine

I know it’s more expensive, but it’s not as ripe for the potential for Zigbee to just YOINK and start charging for stuff, I’d have loved it to have Z-Wave either instead of or as well as the Zigbee module. Open source FTW.