Most of the ESP8266 and ESP32 projects and products we cover here use the Espressif microcontroller as the main chip, but ESP8266 started as a WiFi module meant to be controlled with AT commands from a host device. But there are still “legacy” products that may benefit from connecting to the cloud, and Espressif introduced the ESP-Hosted for that purpose in 2020, and recently released a next-generation ESP-Hosted solution (ESP-Hosted-NG) specifically for Linux hosts.

The solution is available in two variants: ESP-Hosted-FG (First generation) exposing an Ethernet interface to the host and suitable for microcontrollers and Linux hosts, and the ESP-Hosted-NG presenting an 802.11 network interface and designed for Linux hosts only. Both solutions include ESP32 firmware and a host driver running on the legacy system. 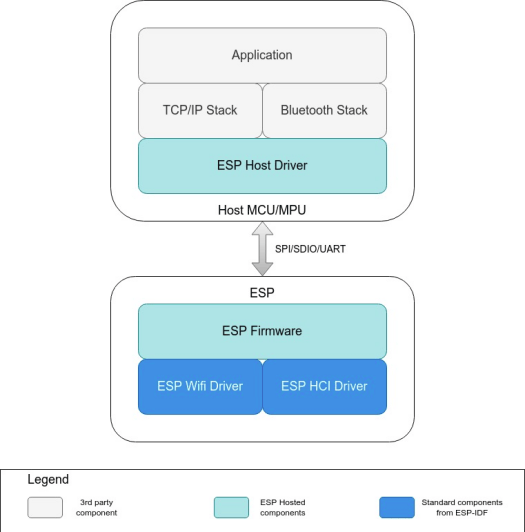 Since ESP32 modules show up as either an Ethernet interface or standard WiFi module, the solution is mostly plug-and-play and does not require as many re-qualification/re-certification efforts since ESP-Hosted does not touch upon use-space applications. The company also highlights potential power saving with the main MPU/MCU’s ability to remain in low-power mode continuously, while staying connected to the network. 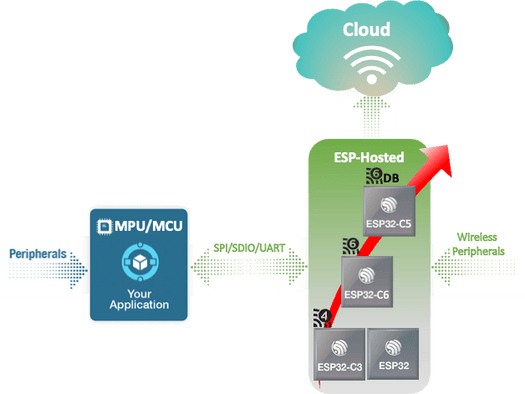 So overall, ESP-Hosted aims to provide an easier upgrade path for offline devices so that they can benefit from the advantage of cloud connectivity such as OTA firmware upgrades, remote management, and improved productivity due to automation and M2M communication.

It seems strange that they do not advertise the ESP32-C2/ESP8684 for this use. It is just a more cost effective variant of the ESP32-C3 with less memory.

Really interesting! I’m considering using this as a base for an “Internet providing unit”, that could use ethernet, wi-fi or LTE without the host needing to care how. Just a black box.

I’m using raspberry pi connected via ethernet for that purpose. I wonder what kind of speeds I can expect from esp32+USB. It will definately cheaper and more power efficient.

Hello  @DurandA,
ESP32-C2 support is added for ESP-Hosted First Generation. (Next generation will also be added in upcoming releases).

@Ivan,
Right now, we do not have exact timelines for the same. But Yes! we have already considered USB support in upcoming development.