It is the first dual-band processor from Espressif, as while the Shanghai-based company previously announced the ESP32-C6 WiFi 6 and Bluetooth 5 LE RISC-V SoC last year, it only supports 2.4 GHz frequency. Note it’s not the first dual-band WiFi 6 IoT chip on the market as NXP introduced the IW612 Wi-Fi 6, Bluetooth 5.2, 802.15.4 tri-radio solution last January, but ESP32-C5 should target different use cases. 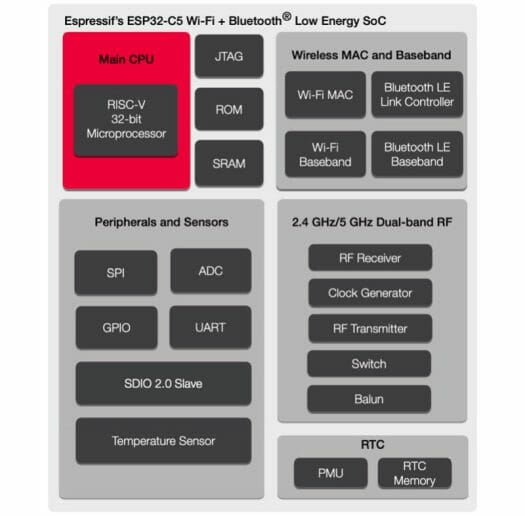 Espressif will offer continuity in terms of software as the ESP32-C5 WiSoC will be supported by the same Espressif’s open-source FreeRTOS-based ESP-IDF used by other ESP32 and ESP8266 devices. It will also be possible to use the ESP32-C5 as a wireless co-processor with an external host through either the ESP-AT (AT command set) or ESP-Hosted (802.11 interface for Linux hosts) SDKs.

The company does not provide availability information for the new dual-band chip in the press release but invites interested companies to contact them.

Lets hope they just took it for granted and didn’t mention it, a mcu whitout I2C would indeed we silly

The previous ESP32 and ESP8266 don’t have I2C either, that’s done in software using the GPIO of your choice, and that didn’t prevent them from ruling the IoT world!

It has already been bitbanged with tony pics, so should be a reason to cry

What happened to Bluetooth Classic?

I’d say it’s about to die

How long before there is any support FreeRTOS, Zephyr, and/or ThreadX? The ESP32-C6 was announced over a year ago, on Apr 9, 2021, with the exact same support language as the C5 just was, “ESP32-C6 will be supported through Espressif’s mature IoT Development Framework (ESP-IDF)”. Take a look at ESP-IDF on github today. Don’t see anything about ESP32-C6 support, nor ESP32-C5 for that matter. Unless it’s hiding in there… So if a chip released over a year ago still has no support, how long until the ESP32-C5 is ready to use? Shame, as there are so very few choices that… Read more »

The little bit I know… the way the C6 was designed the radios time-shared the antenna. But the way Matter ended up using Thread, Thread needs to listen 100% of the time so it can’t share the antenna. Not sharing antennas means multiple RF front-ends which is a huge design change. This issue ruins the C6 as a Thread border router which I believe was the intended target market. The alternative design being offered is a combo of the S3 and the H2, this allows the H2 to listen to Thread 100% of the time. You can download the S3/H2… Read more »

FLASH Memory Space?
How about Arduino Compatibility?
Will my existing Arduino WIFI 2.4Ghz project code work on it?
How to select 2.4Ghz vs. 5Ghz

AFAIK this chip is identical to the ESP32-C3 except for the dual band radio.