GEEKOM is a Taiwanese company with 19 years of experience in the development and design of computer products, and that recently switched its focus to the mini PC market with the goal of becoming a world-famous reliable PC brand and solution provider.

To celebrate the company’s 19th anniversary, GEEKOM is throwing a party where customers can purchase its Intel-based mini PCs with a discount of $15 to $50 depending on the selected model. 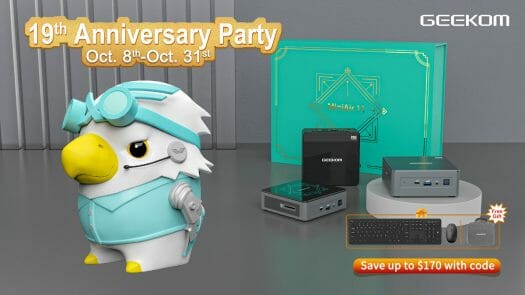 Let’s get through the available mini PC discounts right away:

Ian reviewed the GEEKKOM MiniAir 11 with Windows 11 Pro and Ubuntu 22.04 a few months ago and was pleased with the performance of the device with near silent operation, the wide selection of ports including an SD card and a CIR (Consumer Infrared) port (the latter has been removed in new production batches), and the inclusion of a mini DP to HDMI adapter for people without a mini DP cable. Some of the downsides included the lack of SATA expansion and limited BIOS options.

I just don’t get it… Pricing is far to high. You can get a AMD 5800H laptop for similar price which will out perform all of these boxes, not by a few percentage but double the passmark. You can also get a 1185g7 laptop at the faction of these prices. These boxes must come down in prices even with the discount as they are not inline with cheaper laptops with similar specs.