Olimex has just launched the ESP32-C3-DevKit-Lipo board based on ESP32-C3 RISC-V wireless microcontroller offering WiFI 4 and Bluetooth 5.0 connectivity, some I/Os, as well as USB and JTAG.

As its name implies, the board can be powered by a LiPo battery and charged through a USB Type-C port. It offers up to 15 GPIO for expansion and comes with an ICSP connector in case you need to reflash or debug the bootloader through a JTAG interface. 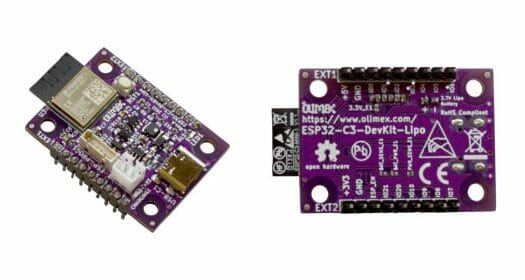 The board supports Arduino, PlatformIO, Espressif ESP-IDF, and other frameworks/languages compatible with ESP32-C3 microcontroller. Olimex ESP32-C3-DevKit-Lipo is open-source hardware and KiCad schematics, PCB layout, and other hardware design files have been released on GitHub under the “CERN Open Hardware Licence Version 2 – Strongly Reciprocal” together with ESP32-C3 datasheet and technical reference manual.

There’s also a basic ESP32-C3-DevKit-Lipo user manual on GitHub, and Shteryana Shopova used the board for a RISC-V workshop in Bulgaria (see the presentation slides in Bulgarian) where people could learn how to use the ESP-IDF with a C sample, JTAG debugging with OpenOCD, and she even showed some inline RISC-V assembly in the C code, as well as some Bluetooth demo apps.

Olimex sells the board for 6 Euros on their website.

Beware that the esp32-c3 doesn’t really have USB. It’s an internal usb-to-serial(and jtag). A (smart) way to bring programming/debugging with only two pins.
But you don’t get a USB_FS that you can use/program and create usb devices with.

Btw, they just added a (basic) manual 3 hours ago in the github you’ve linked. (see DOCS/)

This is yet another Dev board that places the USB-C connector flush with the PCB. It makes it hard to embed it into a case. Either the PCB has to be filed or cut-off or the case/housing has to have a big hole for the connector to ensure the USB cable can fit in. None of the option is a good option fo embedding in a non-hobby project.

I’m not convinced by the esp c3, mostly because of lacking usb.
But olimex does a really great job : the board is small, cheap, completely open source (the github has absolutely everything, it’s quite rare)