Mirek Folejewski’s (aka Mirko Electronics) PicoBerry is an open-source hardware, miniature Raspberry Pi CM4 carrier board with just a USB Type-C port for power, a 40-pin Raspberry Pi GPIO header, and barely anything else.

At just 70x20mm, the 2-layer board only adds a few LEDs, namely the ACT/PWR LEDS and two user LEDs, and supports any Raspberry Pi CM4 module with eMMC flash, but not the Raspberry Pi CM4 Lite since the board does not include a microSD card slot. 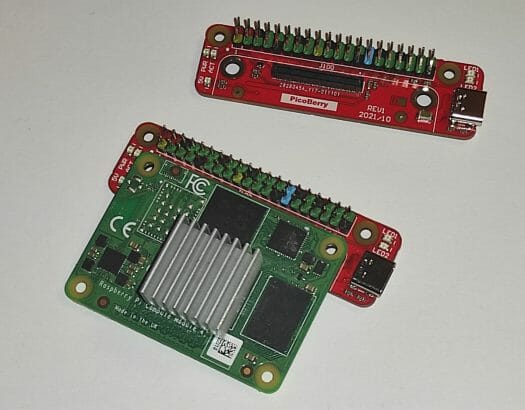 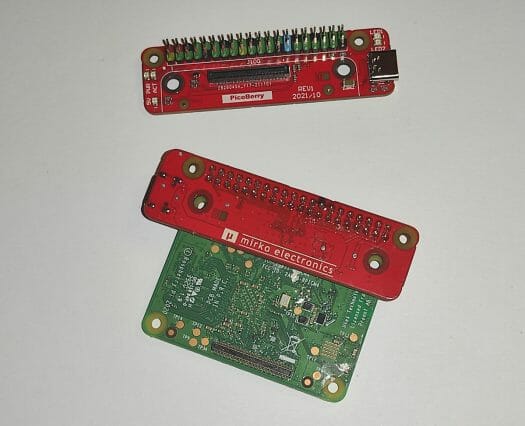 The board was designed with both Altium and KiCad, and the hardware design files including schematics, PCB layout, BoM, and Gerber files can be found on GitHub, all released under the CERN OHL v1.2 open hardware license. Mirko is also in the process of getting OSHWA certifications for the board based on the Tweet that informed us of the board.

It’s not the first such miniature carrier board for the Raspberry Pi Compute Module 4, and Uptime Lab’s MinCab CM4 carrier board is about the same size, but only exposes the USB Type-C port and a few test points, making it more suitable for server or gateway applications without expansion module. The PicoBerry is probably also better suited to CM4 modules with WiFi and Bluetooth but does also offer the option of adding a Raspberry Pi HAT if needed.

It’s not Mirek’s first open-source hardware design either, and we covered his Femto design – a tiny Raspberry Pi RP2040 module – last August, and you’ll find other Raspberry Pi CM4-based projects on his GitHub account such as the MirkoPC carrier board to create a mini PC or the BitPiRat Bitcoin network node. None of the designs appear to be mass-produced, but he does offer a few DIY samples on Twitter from time to time.

Plenty of use cases for this minimalist design, where the waveshare is too bulky

In the same vein I also discovered this yesterday, allowing to “transform” a Zero to a 3B:

That’s a use of ‘amazing’ of which I had previously been unaware.

Well this morning I’ve seen an RPI4-2GB at 188 EUR. I think that qualifies as “amazing”. Or maybe the term is not suitable in such a case ?

It can be both good or bad. I’m going to go with the bad meaning on this.

Yes that was the intent. You just suddenly made me doubt it was suitable for the bad meaning 😉

It’s normally used for the good meaning, so I wanted to make sure I was understanding you correctly. It helps if there’s a </s> or *eyeroll* to imply a degree of sarcasm or derision to hint at the negative meaning. Much easier doing it in person than via text as well.

Awesome could also be used. Rarely used in this context, though