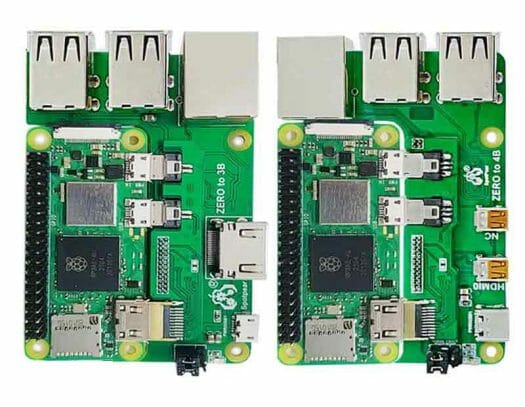 If you have a spare Raspberry Pi Zero 2 W lying around but would rather like getting the ports from a  Raspberry Pi 3 or Raspberry Pi 4, Spotpear has designed three adapters that can also be used as USB docks from a computer or mobile phone. 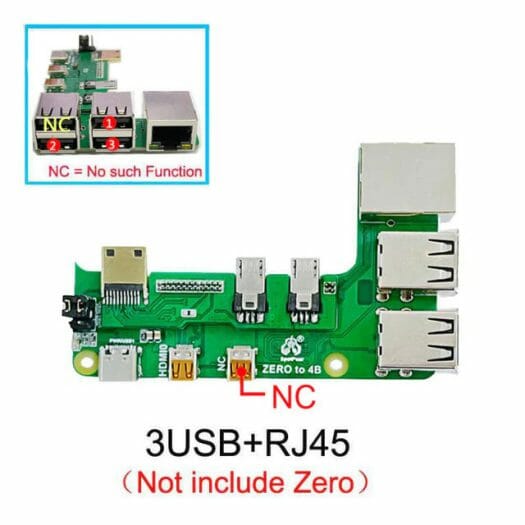 The first adapter the “ZERO to 4B” will get you a Raspberry Pi 4-looking SBC with a Raspberry Pi RP3A0 system-in-package (Quad-core Cortex-A53 CPU + 512 MB RAM), and most of the same ports, except only three USB 2.0 Type-A ports are available with a maximum speed of 480 Mbps, and only one HDMI output due the inherent limitations of the Raspberry Pi Zero 2 W. Also noted that Ethernet is implemented through the RTL8152B Fast Ethernet chip, so wired networking will be limited to 100 Mbps. 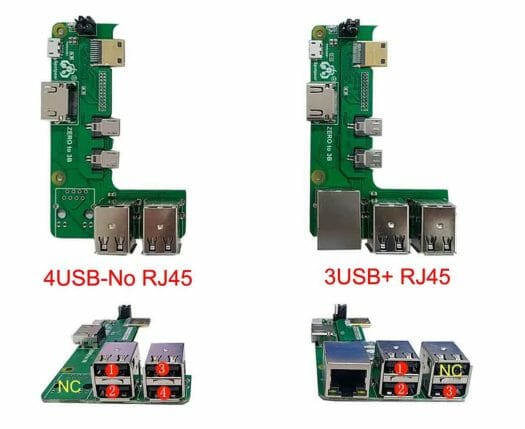 The Zero to 3B adapter ships with a micro USB cable, while the Zero to 4B adapter’s package includes a USB Type-C cable. While we’ve only talked about the RPi 2 W board here, users of the adapters have confirmed those also work with the Raspberry Pi Zero (W) and Banana Pi M2 Zero boards. Besides Spotpear, Waveshare also offers several Pi adapters including a Raspberry Pi Zero 2 W to Raspberry Pi CM3 adapter that we checked out on CNX Software a few months ago.

Spotpear Pi Zero to Raspberry Pi 3/4 Model B adapters can be purchased on Aliexpress for $10.77 to $13.40 plus shipping.  You may also find more details on the product page on Spotpear, or browse their website to discover even more adapters.

The interfaces marked NC (on the picture, not IRL) might cause hair-pulling (“why is it not working?!”). Can’t they delete that physical interface?