The chip is comprised of an Arm Cortex-M4 microcontroller core as well as an Arm Cortex-M0+ always-on core for sensors and will be upgradable to 3GPP Release 17 to support higher bitrates for Cat-M1 (eMTC) and Cat-NB2 (NB-IoT). It also implements GNSS, cellular and wifi-based location, supports AI acceleration, and embeds a secure element for secure communication. 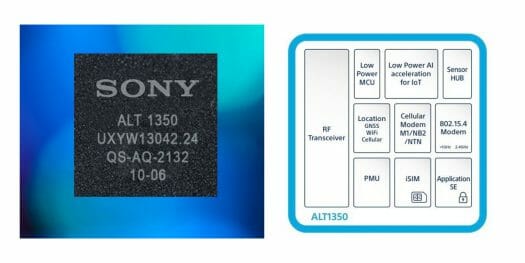 Various optimizations and multiple radios enable a much lower power consumption of up to 85% when sending short messages with the company also claiming 4 times longer battery life for a typical device. The 802.15.4 radio also enables protocols such as Wi-Sun, U-Bus Air, and wM-Bus, as well as point-to-point and mesh technologies.

The Sony ALT1350 is currently sampling to “lead customers” and is expected to become commercially available during 2023. More details may be found on the product page.

Seems like a perfect gateway platform. I wonder how much more expensive than nrf9160 it will be.

Yes, but 5G LPWA is just an evolution of NB-IoT and LTE Cat-M. As I understand it, there’s no new hardware needed.
https://www.cnx-software.com/2020/12/05/sequans-monarch-2-gm02s-lte-iot-module-is-5g-ready-for-massive-iot/

I would love to know the price for that chip. Agreed so much. Interesting Gateway chip.

Looks just as promising as Spresense, I expect it to be shelved the same way.