DFRobot UniHiker is a STEM education platform with a 2.8-inch touchscreen display, a Rockchip RK3308 quad-core Cortex-A35 processor, a GD32V RISC-V microcontroller, WiFi and Bluetooth connectivity, as well as various headers for expansion, and a BBC Micro:bit compatible edge connector.

The UniHiker runs Debian 10 Linux and can be used to teach programming using Mind+ visual programming IDE or Jupyter open-source interface, as well as IoT and AI basics thanks to tutorials and lessons available in Chinese only as the platform clearly targets the education market in mainland China at this point in time. 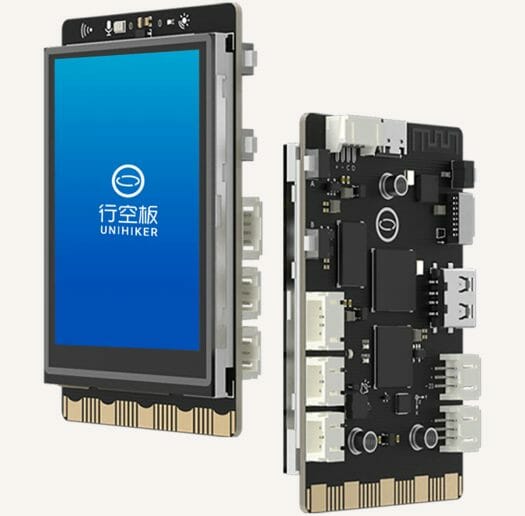 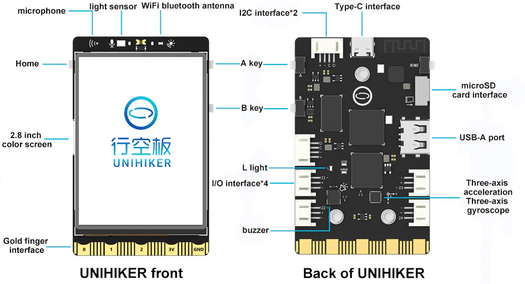 I’m kind of surprised to see the Micro:bit edge connector being used on so many third-party boards including the ELECFREAKS Pico:ed V2, HiHope OpenHarmony board, Wappsto:bit GO, and the Elecrow Mbits, among others. So it must be more useful and popular than I would have expected.

As noted in the introduction, while DFRobot does sell hardware worldwide, the UniHiker platform appears to be reserved exclusively for the Chinese market, as both the official website and the wiki with tutorials and lessons are only available in simplified Chinese, but they do look relatively thorough.

Still, the UniHiker educational board can still be purchased outside of China, as one company made it available on Aliexpress for $82.50 plus shipping if one is really interested in trying it out. Only time will tell if DFRobot decides to translate the documentation into English and sells it on their online store, but I have my reservations as the education market often requires partnerships with governments that may prefer to invest in or subsidize local companies for this purpose.

The Micro:bit edge connector is actually a good choice. There are expansion boards available with displays, sensors, etc. Good to have for making wiring connections. And the widest traces are big enough for alligator clips.