Amlogic S905Y4 quad-core Cortex-A35 processor was first unveiled in January 2021 for 4K Android TV dongles with AV1 support, but we had not seen many hardware platforms with the process apart from Khadas VIM1S SBC for which we just published a review with Ubuntu 22.04. 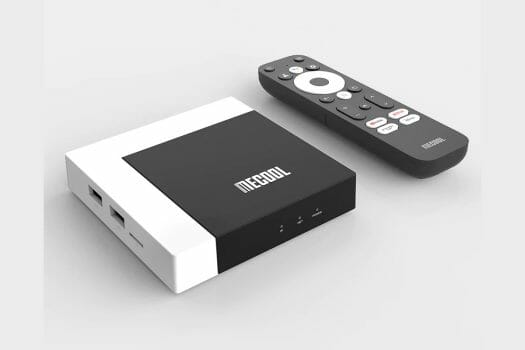 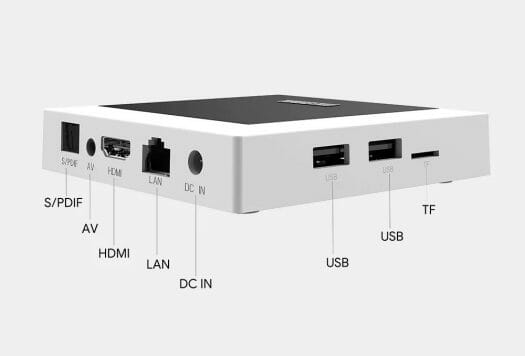 The TV box ships with a 12V/1A power adapter, an infrared and Bluetooth voice remote control, an HDMI cable, and a user manual. MECOOL says the KM7 PLUS runs “Android 11.0 GTV Google TV system” and is pre-certified for Netflix and Amazon Prime Video.

We first wrote about Google TV in 2020 when it was launched on Google Chromecast with Google TV. At the time, we were told that Google TV is basically Android TV OS with a slightly different launcher with a focus on content rather than apps. But it might be worth revising the question “What is the difference between Google TV and Android TV?” on the official Google TV website.

The Amlogic S905Y4 is an entry-level processor that’s supposed to be a cost-down version of the Amlogic S905X4, and is only really suitable for media playback, as other apps and gaming performance will be seriously limited.

Pricing is rather confusing as MECOOL sells the KM7 Plus for $78.99 US, but if you add a 2.4 GHz wireless keyboard, the total goes down to $77.33… [Update: I can see the 15KM7PLUS coupon brings the price down by 15%]. The MECOOL KM7 model with the same specifications but running Android 11 TV OS without Netflix certification instead of Google TV goes for about $57 on Aliexpress including shipping.

Exactly what we were saying regarding Khadas’ VIM1S: such chips are for low-end and it’s hard to be competitive on hardware in this area. Better leave it to those who are specialized in cheap TV boxes.

So the only advantage with the chromecast with google tv is the AV1?, then i would stick with a chromecast, at least it will get better updates.

Is there a possibly a unintended, undocumented feature made possible by this offered software or in all honesty are prior variants of the Amlogic S905X3. Unnable to be upgraded to a widevine L3 variant of this offered Andriod TV OS media box software, due to their manufactured hardware limits?