When Google Chromecast first launched in 2013, it was based on a stripped-down version of ChromeOS and was meant to be used controlled via your Android phone, iPhone, Windows PC, or Mac computer to stream audio and video, and even more recent versions like Chromecast Ultra were not standalone media players.

But Google’s “Chromecast with Google TV” changes all that as it’s based on Android TV OS and supports all 6,500 apps designed for the operating systems, and ships with a remote control to playback videos from YouTube, Netflix, Hulu, and other apps without the need for your phone or a computer, although it still support all existing Chromecast features. 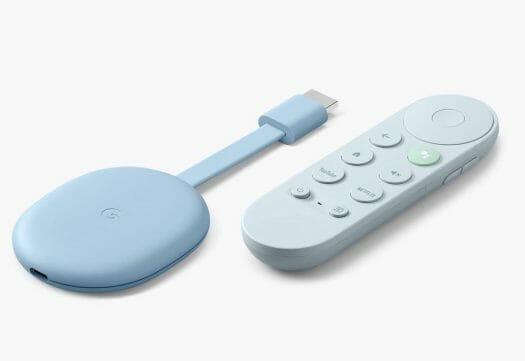 Some of the specifications above are from a thread on Kodi forum since Google does not provide the full specs. ChromeCast with Google TV is currently available in “Snow”, “Sunrise”, or “Sky” colors, and ships with a voice remote with Bluetooth and IR transmitter, accelerometer, and integrated microphone for Google Assistant.

The company did not provide the full details, but as I understand it, Google TV is basically Android TV OS with a slightly different launcher with a focus on content rather than apps. The new Chromecast also adds other features such as the ability to control smart home devices, and later in 2021, it will also be compatible with Stadia cloud gaming service.

The “Google TV” brand is actually not new,  as it was the older name for the TV-optimized Android operating before it was renamed to Android TV. What will we have to see in the future is whether Google TV and Android TV will coexist, or whether all official Google streaming device will now run Google TV. 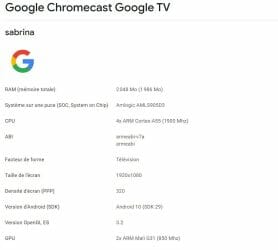 No Stadia support (yet), no Ethernet port, expensive.

Hopefully – like most low cost Netflix-approved devices primarily designed for WiFi – the USB connection (this time Type C, but on others an OTG micro USB type B usually) used for power will also support connection of a USB Ethernet adaptor, USB storage and hub etc. This is what Google did with the Chromecast Ultra 4K device as standard (the Ethernet port was in the PSU), but WiFi tech has improved since then so I guess Google think Ethernet isn’t required for Netflix, Amazon etc. bitrates. The SoC supports USB3 I believe, but even if it’s USB 2, that… Read more »

No AV1 decode, no buy. Bizarre since Google will be the biggest beneficiary of AV1 with YouTube.

No Wi-Fi 6. Low 8 GB of internal storage, only 4.4 GB usable. No Stadia at launch is baffling; they are doing everything they can to make Stadia a flop.

Other than slightly more ram I don’t see much difference between this and the Amazon 4k with regards to capabilities (and the Amazon stick officially supports Ethernet via an accessory iirc).

This SoC should be faster. A55 at a higher clock speed than A53. I’m not sure about the GPU performance.

The extra half gigabyte of RAM can make a difference. Good for stuff like exiting Kodi to the home screen and returning, using a web browser, running compatible Android apps from Google Play, etc.

I wonder if DV6071Z Amlogic S905Y4 4K Android TV Ready Dongle for Operator
Will ever go onsale to the public.

Not the same since S905X4 does support AV1

They would probably have had to delay the launch until next year with S905X4.

8GB flash is really limiting if they plan on supporting many Android TV apps.

Few local games and you have filled that up right away.

You really want wired Ethernet for Stadia so I would expect a new charger with integrated RJ-45 Ethernet port similar to what is available for Chromecast Ultra as an option.

FYI, the new Google TV Home (LauncherX) launcher app has hit the Google Play Store, but it is pretty useless for now, see: