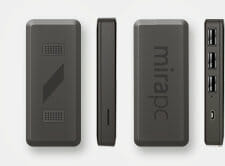 Stella Mira, a new technology startup, has come up with a new Android mini-PC based on AllWinner A10 (how original!) called the Pocket Console (aka MiraPC). What makes it stand apart is that it comes with built-in Bluetooth, has several versions based on the NAND flash size: 8GB, 16GB, 32GB, 64 GB and even 128 GB, and the company plans to release a 3G version in September.

The company also provides a dock, the Stella Mira Pocket Dock, that comes pre-loaded with one of supported Linux distributions, without the requiring the knowledge and time to configure microSD card for Linux.

The company will provide 4 Linux distributions:

Beside running Linux, the Pocket Console can also “run media center applications, such as XBMC or Plex”, according to Stella Mira.

Stella also explains that the dock helps with cooling of the device, because it exposes both sides and the ventilation holes.

The package will include the Pocket Console, a quick-start guide, an HDMI cable, a USB cable and a USB adapter.

The device is rooted and the company will provide SDK and early firmware builds to registered developers on stella-mira.com.

You must now be at the point where one word comes to mind “AWESOME”!

Unfortunately, time has come to talk about pricing and availability:

This is where this product all fall apart for me. I understand that it has more features, but an AllWinner A10 miniPC with 1GB RAM and 4GB Flash costs about $73 on Dealextreme (and it’s not the cheapest option). If you add around $5 dollar for upgrading to 8 GB Flash, around $10 for Bluetooth 2.1 + EDR (probably too much since I’ve seen Bt 2.1 + EDR USB dongle for $7 on Amazon…), and a few more dollars for extra USB connectors (let’s be wild and add $5 for this), we find a total price of $93. So I think that an acceptable price for the 8GB version should be closer to $100 than $130.

Another issue if that they currently only ship the device to the United States (for US $5.35 extra). They sell the device via Ebay, accept orders from July 23rd to August 6th for the first batch, and expect to ship them at the end of August.

They seem to be getting ahead of themselves, XBMC does not support the Allwinner VPU under Android or linux so no video playback is possible.

It’s hoped Allwinner will give XBMC team full access to what they need but it’s not guaranteed & a lot of people already made the mistake of jumping the gun on this.

it’s incredible to see the number of mini android pc selling this year, is this the beginning of a new era for pc ? really interresting for my part I want the ouya android game pc 🙂

I agree. To expensive! Did not noticed that price card before. If they lower it, they might get a piece of the pie, otherwise most people will indeed still choose the uHost/OvalElephant and MK802 type of devices.

> an AllWinner A10 miniPC with 1GB RAM and 4GB Flash costs about $73 on Dealextreme.

Yep, and these are now can be found for as low as $60 on Aliexpress (yes with 1GB RAM).

3GB of RAM on an A10 device, is that even supported?

@ joker159-France
The OUYA is interesting, but it’s not for this year.

@ Peter
You were not the only one to tip me last night, so I had to write about it. 🙂

@ Alex
Yep, they indicate this in their specs. I know it’s possible to set the GPU frequency in the fex file, but do not know the limit.

I’m pretty sure that was supposed to read “3G version with 16GB flash.” @ rm

Interesting, What about OpenGL drivers in their Ubuntu…

@ Lacroser
I doubt they support anything that the community does not support yet.

I thought Allwinner A10 comes only with a Dual-Core Mali400MP GPU.

@ max
You may be right but I can’t find documentation about that after quick search.
I found out that the maximum CPU CLK signal frequency is 381 MHz (in the datasheet), so the 500 Mhz claims must be wrong…

not just the price .. no ethernet or SATA .. so i’ll stick to the mele until something comes along thats better … it looks like it may be a quad CPU core tegra3 based board for circa $100 .. please please 🙂

@ mac me
I’m hopeful that we’ll have a Chinese board with a quad core processor below $100 next year.
I don’t know of any $100 board / device with a tegra 3, ethernet and SATA. although the OUYA would fit that bill, except for SATA.