Rikomagic, the company that sells the MK802 mini PC, is planning to sell a netbook based on AllWinner A10 processor that runs both Android and Ubuntu operating systems. This device looks very much like the H6 netbook  with a 10″ 1024×600 display, 1 GB RAM, 4 to 8 GB flash. an SD card slot, 3 USD ports, audio in/out and a front camera. 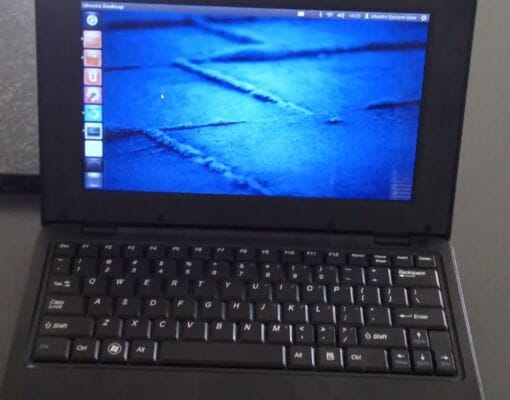 Android currently runs in the internal flash, and Ubuntu can be booted from an SD card. In the video below, Andy Kirby of Rikomagic gives an overview of the netbook and shows a demo of Ubuntu Desktop running from an SD card. The Linux OS seems to run relatively smoothly as he shows pages rendered in Chromium.However, hardware acceleration (both OpenGL and VE) is missing, and Youtube video playback is very slow as it is rendering in software. Open Office is also a bit slow, but it’s probably due to the fact that it’s running of an SD card. Development is still going on to make Ubuntu more usable on this netbook, and performance issues should eventually be solved especially if the OS can run from flash. Power management also needs to be worked on as there is 6 hours battery life whether it’s in standby or running. 1024×600 resolution might also prove to be a problem running Ubuntu as some buttons may not be accessible. (It happens to me in my Acer Netbook).

I guess that’s Ubuntu2D only ? Well when you see that even Asus is not ashamed to ship netbook with 2D only …

@ekimia
Yes, I suppose so. Unity 3D without GPU acceleration would be very very slow.

I hope this time they get it right and include *at least* one video port (VGA or HDMI). I don’t understand what’s stopping it, especially when the SoC already supports it.

tanks for the post. i see there is hope for my two augen genbooks. all i want to do is put ubuntu on them, which i’ve been trying to do for a year now. replacing the board with the hackberry beginning to look like an option.