Quite a few months ago, I received an Energy Micro EFM32 Tiny Gecko Starter Kit, but I haven’t done much with it. But recently I saw a tweet from EnergyMicro about Simplicity Studio supports for Ubuntu, and I know it can be problematic to find proper tools for ARM MCU development in Linux, so I decided to give it a try. The first part is about Simplicity Studio, and energyAwareTools which are specific to Energy Micro, but the second part deals with setting up Eclipse and CodeSourcery ARM toolchain for MCU development which should be reusable for other MCUs from vendors such as Texas Instruments, NXP and STMicro. I’ve used a PC running Ubuntu 12.04 64-bit with the instructions below.

Simplicity Studio is part of the 4 steps of the getting started guide with EFM32 MCUs. It has been available for Linux for a few months, here’s how to install it in a terminal window:

That’s it. It’s very easy and it worked “out of the box” for me. 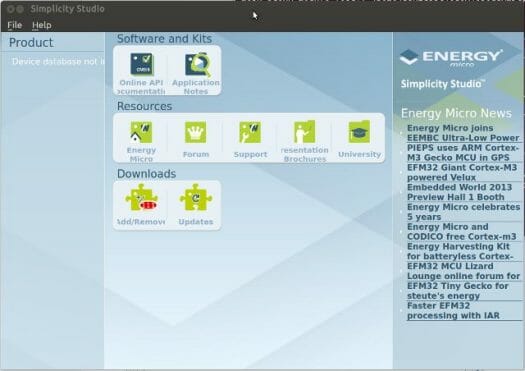 Then click on Add/Remove to install the required documentation,  firmware and samples. I went the “brutal” way and just installed everything. It just took 15 minutes.

Energy Micro tools are not integrated (yet) with Simplicity Studio for Linux, but you can download the latest version on Energy Micro download page.

I first used the current stable version of the tools (eACommander, eAProfiler and eADesigner), and then installed the latest beta (2.72) for energyAwareCommander:

Since the binaries are build for Linux 32-bit, you may have to install a few i386 packages such as:

Don’t try to install “libicu48:i386” even if you see a warning, this will mess up your system. First I did not pay attention, blindly answered “Y”, and it removed 991MB from my installation include libreoffice, gimp and unity support…).

To be able to access the USB device as a standard user, you need to add a file for udev, and change some permissions:

Restart your system. And you can try energyAware Commander: 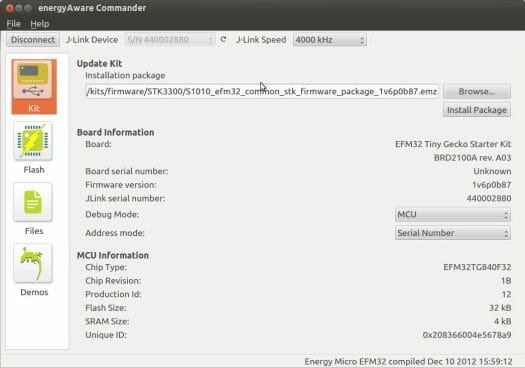 It can connect via J-Link, and detect the board but trying to update the firmware resulted in the error “Failed when asking kit to reset”. I’ve also tried to run the demos without success. Anyhow, let’s move to the next step that is building our own app in Linux, and run them on the target.

I knew I wanted to use an IDE in Linux to build and debugging the code, but among the list of third party tools listed on Energy Micro website, I was not too sure where to go. Luckily, somebody asked for the “Recommended IDE on Ubuntu” on Energy Micro forums, and the answer seems to be Eclipse + CodeSourcery ARM EABI toolchain. There’s also an application note to do just that for Windows, and I’ll use that to write  instructions for Ubuntu or other Linux distributions.

Now start eclipse, and install some plugins by going to “Help->Install New Software”, and add http://download.eclipse.org/releases/indigo to “Work With field”. Then browse to “Mobile and Device Development”, and select “C/C++ GDB Hardware Debugging”. Press the Next > button, and follow the instructions. 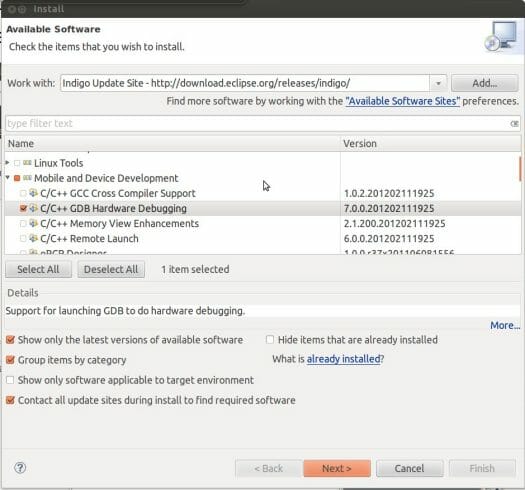 Repeat the same instructions with http://embsysregview.sourceforge.net/update to install Embsys Regview (Optional, and I haven’t tried it yet).

We can now start a new project using some sample code. I’ve tested it with blink and lightsense samples, and write the steps with blink sample below.

First go to File->New->Project-C/C++->C Project, and click Browser to navigate to blink sample project we’ve downloaded with Simplicity Studio (the path is energymicro/kits/EFM32TG_STK3300/examples/blink for my starter kit). Select Empty Project and “Linux GCC”, and click Finish. 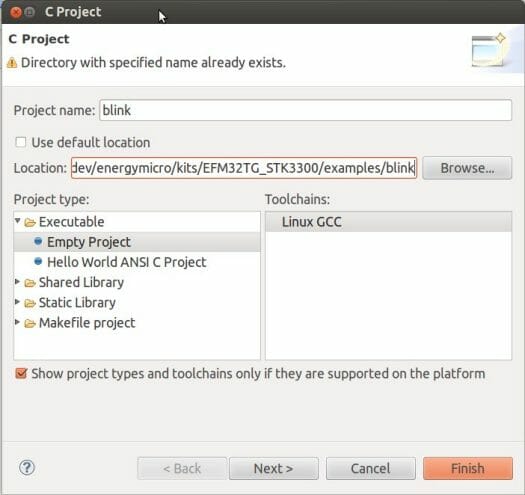 Then click on Project->Properties, and do the following modifications:

We can now build the code. Select Project->Build Project, and within a few second you should see the build is successful in the Console tab.

In Eclipse, click on Run->Debug Configuration, Highlight GDB Hardware Debugging, right-click to select New, and do the following modifications:

Now click on Debug in the same Debug Configuration Window to start the program, the Eclipse display should change to Debug mode as shown below.

Now click on Resume (or press F8) to run the program (the USER LED should blink on the board), or add breakpoints, monitor variables as needed.

I would like to see a review about the kickstarter gcw-zero here :-).

@TestABob
I’m always ready for reviews, but I need the hardware… Now I try not to buy things I don’t really need :). If I review something, it’s most likely that somebody sent it to me.

I’ve just tested your Tutourial, in Xubuntu : it worked.
In this step in eclipse:” C/C++ Build: Modify build directory to ${workspace_loc:/blink/codesourcery}.”
I had to give the full path (don’t know why).
Now Im testing it on Debian 7.
I want to write a german Version of your Toutourial and publish it on my blog (http://technik.blogbasis.net/). Are you fine with this?

@aberlin
Good to know it could help. No problem, go for the German version, but link back to this post would be welcomed.

@Jean-Luc Aufranc (CNXSoft)
If you want to make a look at: http://technik.blogbasis.net/efm-32-starter-kit-unter-linux-mit-eclipse-benutzen-08-06-2013

I can run python program for studio instalation, it says:

@Emile
I don’t really know Python either, but it looks like something is missing in a zip file. Maybe a corrupted download? Try to download again.