There are already some watches such as Texas Instruments ez430-Crhonos and MetaWatch that are used as development platform and let you develop software yourself. Some hardware documentation is usually provided as well, but Energy Micro forums’ member hairykiwi is trying to go a bit further. He created a watch based on EFM32 Cortex M3 MCU and already released the KiCad schematics and gerber files, with 3D printer files and firmware source code to be released once they are ready. The project is called “Open source Time Machine #2” (OTM2).

The project makes use of the following components and features:

The watch may be improved at a later stage with the addition of Bluetooth LE, ANT+, GPS, etc…

He has just assembled the first PCB as of last week, and it looks pretty neat. 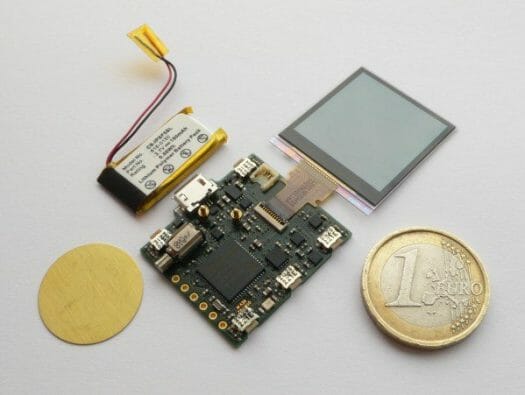 There are no videos of the watch yet, especially since the device may not have booted yet, but if you want to see what the display is capable of, you can watch the video below with the Sharp display and an EFM32 devkit.

This open source hardware project is licensed under the Creative Commons Attribution-ShareAlike 3.0 Unported License and, will be open source firmware, probably released under the GNU Lesser General Public License v3.0.

Schematics and gerber files are available in the project’s github repository, and others files (3D parts & source code) will be available as the project progresses. There are a few more pictures, and a lot more explanations about the assembly in the forum post.

I thought (for a moment) that open-source advocates from the future had used a time machine (invented in the future) to come back and make the design of time-machines open-source, to prevent the evil corporates of the future using their patent on the time-machine to change the course of history, by assassinating RMS & Linus in their baby-strollers. 🙂

I should never have watched the Terminator movies…