When Wandboard launches their Wandboard Solo and Wandboard Dual boards, many people asked when there would be a quad core version. At the time, the company said they had no plan for a quad core version to keep costs low. If we are to believe a Wandboard Quad listing on mouser.com, they must have changed their mind of they now offer a Freescale i.MX6 Quad version with 2GB RAM, and SATA support, which will sell for $129 (as shown on Wandboard site) or $139 (mouser.com) once it becomes available. 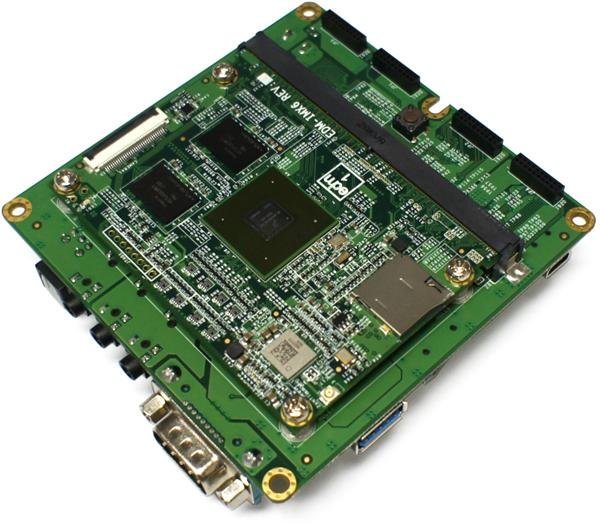 The Specifications are very similar to Wandboard Dual, except for the quad core processor, 2GB RAM, and working SATA connector:

Wandboard Quad is a serious contender to the UDOO QUAD, as long as you don’t need the Arduino headers provided by UDOO boards. You won’t find Linux (Ubuntu) or Android images right now, as the board has not been announced yet, but since it has started to show up on both Wandboard.org and mouser.com, we may get an official announcement this later week [Update: No PR, but they’ve just tweeted about it]. The EDM boards, as well as EDM connectors, standoffs and screws, will also be available for sale in packs of 10-units, if you want to use those in your own baseboard.

[Update: Wandboard has just mentioned the new board will be available in June:

The current status is that we have 60 working samples in our hands and a production run of Wandboard Quad’s will ship to distributors early June.

Nice board, shame they didn’t added usb 3.0 controller on the pcie bus, it’s way preferable to my taste than sata.

Finally having support for SATA is big for me. I hope they modify the existing case (or make a new one) that can accommodate a 2.5″ drive. Then it would make a great little desktop machine.

The other omission is using an SD for boot instead of NAND or eMMC.

Does anyone know whether SATA with an SSD would be (latency, not throughput) faster/slower for booting over NAND or eMMC?

Also, how does one access the PCIe bus physically – is there a PCIe slot on Wandboard’s mainboard?

@Ian Tester My guts tell me you may have to do it yourself, or wait for a third party to do it. @hroth Before I though eMMC was a definite advantage over an SD card, but since I got a Class 10 SD card, I’ve somewhat changed my mind, because I found that fast SD cards are nearly as good as eMMC for using Linux/Android. So even though data transfer may be faster with eMMC, there may not that much difference when running the OS. There’s no PCIe bus on the baseboard. You’d have to design your own baseboard with… Read more »

Don’t forget that SD is just a development of MMC, so there’s little difference between SD and eMMC. The hardkernel site says their eMMC modules (on the Odroid boards) are twice as fast as class 10 SD. Apart from a faster transfer speed I would imagine their other characteristics are identical or nearly so.

It looks like the easiest way to get PCIe is to use a different carrier board. Technexion, who seem to be the ones behind the EDM standard, have the Fairy:
http://www.technexion.com/index.php/products/edm/edm-carrier-boards/fairy

It provides two mPCIe slots/sockets but is twice the size of the Wandboard carrier board.

@Ian
My EDM module in Wandboard has a MAC address from Technexion (even though Wandboard said Technexion does not provide the modules to them), and Technexion is apparently also involved in at least parts of software development for the Wandboard Quad, e.g. : http://patchwork.ozlabs.org/patch/246726/ .

@hroth
FYI – Technexion EDM standard modules are commercially supported and provide eMMC instead of an SDCard on Wandboard.
They are pin compatible. and could drop into the Wandboard carrier.

@myfoolishgames
FYI – SATA is built into the Freescale i.MX6 chip, whereas USB3 would be extra silicon.

Hi,
Excuse me my bad english. I would like to ask if someone knows what is the current linux support for this board ?

I am very interested to use this board in a NAS. With sata and a gigabit lan, I think the performance will be very good.

@Leo
Ops… I got the information I want in the wanboard site.

myfoolishgames :
Nice board, shame they didn’t added usb 3.0 controller on the pcie bus, it’s way preferable to my taste than sata.

That’s new trend starting. When there was no SATA, people preached: “If only it had SATA, I would do something useful with it.” Now that board with SATA are within immediate reach, it’s still not good enough. There’s surely no production ARM SoC with USB3, and standalone chips cost ~$20 (prooflink: http://www.cypress.com/?id=3521&source=header). Wanna pay $20 times 3 more for the end product? Nobody else wants.

@Paul
I agree people never seem to have enough 🙂

But there’s at least on ARM SoC that supports USB 3.0 natively: Exynos 5.
However the cheapest devices you can get cost $250: Arndale board and Chromebook XE303

@Jean-Luc Aufranc (CNXSoft)
Yeah, I remember blue port on my Chromebook, but thought it’s a separate chip still. Good to know it’s native. Kinda explains why there’s only one port – they decided not to put extra USB3 hub.

Was just wondering if anyone knew the power requirements for a Wandboard Quad? I power supply is listed as 5V, but how many watts at 5V?

@Paul Frechette
I’ve used a 5V/3A power supply for my testing, and if you add an hard drive you may probably need that. But 5V/2A power adapter should also be enough. I’ve done some measurements under load and it never got over 8 Watts.
http://www.cnx-software.com/2013/07/25/wandboard-quad-unboxing-getting-started-with-android-and-linux-via-the-yocto-project/#comment-72795

If your applications is able to all 4 CPUs and the GPU at the same it may go higher than that, but I haven’t tried.