Embest, a subsidiary of Element14, has just announced the MarS Board, a development board powered by Freescale i.MX6 Dual (2x Cortex A9) with 1 GB RAM and 4GB eMMC flash. This is not related to the Marsboard based on AllWinner A10, and designed & manufactured by another company. 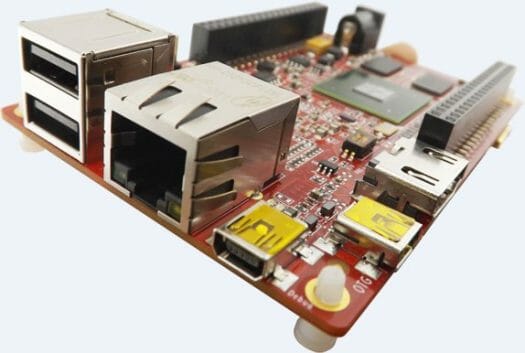 Here are the key features of the MarS Board:

That means we now have low cost (<$100) platforms for most i.MX6 processors (expect Solo Lite) with GK802 (i.MX6 Quad), Wandboard Solo (i.MX6 Solo), Wanboard Dual (i.MX6 Dual Lite) and the MarS Board featuring i.MX6 Dual. The closest competitor to the MarS Board is the Wandboard Dual, and both sell for $99. Thanks to the Dual version, MarS supports 1080p60 video decoding (vs. 1080p30), and features Vivante GC2000 GPU (vs. Vivante GC880) compared to the Wandboard Dual. It also comes LVDS and LCD connectors, and an eMMC that should provide better performance than the micro SD used in the Wandboard. The Wandboard, however, has more audio I/O including S/PDIF, comes with built-in Wi-Fi and Bluetooth, and its baseboard / SoM makes upgrading possible.

A big disappointment with the MarS Board is that although SATA-II support is integrated into i.MX6 Dual, the company apparently did not feel necessary to add a SATA connector *facepalm*, and I’ve been confirmed SATA signals are not available via the expansion headers either.

The board will be available in May 2013 for $99. You can find more information and register your interest on MarS Board page.

They should consider quad core instead of dual core…

@Jean-Luc Aufranc (CNXSoft)
Yeah but for 100$ I can get a quad core A9 board so …. with Exynos which I do prefer to a Freescale.
A bit too expensive maybe ? It’s a free market though, if there’s interest in it then sure $100 is OK.

I need Quadcore with 2GB memory too.
Where is it?

@armerJ
Boundary Devices must have Nitrogen6X boards with 2GB RAM. The price is probably around $200 though.

@Pepe
How could I forget about the Exynos ODROID-U2/X2 boards? 🙂 I suppose my mind was focused on Freescale boards.

These prices are nice until you start ordering.
For Wandboard I went from 79 euros to a final price of 170 euros, at which point I simply didn’t order.
At first there is a need for a case and power adapter. Then you need to ship it, VAT, credit card processing fee and whatnot. And voila, you have a product in the category of used laptops with sata, screen, audio out and video out.

SabreLite is too expensive, hope the price compete with RasPi or next-gen Beaglebone

@Smurf
I went through the same issue a few years ago, I wanted to order a Beagleboard-XM or a Pandaboard, but I just gave up because I did not want to spend $300 to $400 for a hobby.

@ezyclie
The ODROID-U / U2 boards could be an option for quad core. $69 for the first, $89 for the other with 2GB. You also need to add $30 shipping, buy some accessories, and pay taxes…

@Jean-Luc Aufranc (CNXSoft) I vote for the Odroid stuff too, unless of course you have a very good Reason you want a Freescale or something else. It’s got a very good price and it has a common, well supported in Linux SOC. It’s also got MALI-400 HW which will work with LIMA. It’s interesting though that you can get many SOCs for very good prices these days. If you’re willing to do some hacking a lot more, even Tegra 3 can be bought in the Ouya console for $100 and you can probably sell the controller to get some $… Read more »

@Marius
Ouya has only one USB port, these boards have usually ethernet/wifi/many usb/whatever

@Marius
The only problem with the ODROID boards is that, AFAIK, you can’t play videos via the VPU in Linux (yet).

@Smurf Exactly. I never hear anyone speak of the shipping costs. Most of the official distributors will only ship using FedEx or UPS and they both charge atrociously high rates for International shipments, so much so that a $100 board ends up costing $180. Then you are slapped with an additional $60 customs duty after the product arrives. It’s pointless making such cheap boards if the distributors won’t offer any economical shipping options. Chinese distributors like DX can manage to ship for free worldwide but try to ship anything from US or UK and the shipping charge itself kills the… Read more »

@Marius
None of the ODROID boards have Gigabit Ethernet. That itself is a deal breaker for me. 10/100 just doesn’t cut it anymore these days.

@ezyclie
Yeah Sabrelite is extremely overpriced. The difference between the dual core and quad core chip is only $15. $120 would have been fair price for that board but they inflated it to high heaven.

In the comments above I can read about high shipping costs and so on. I agree what initially looks a bargain ends up in not so cheap DIY board but do consider that distributors have to make some profits, they have to add VAT/TAX and shipping costs are in most cases 1:1. Futhermore distributors also have to pay import and custom duties.

@Andy What are you going to do at 1 Gig that you can’t do at 100 Mb/s? Just curious. We have a gig LAN and switches, but that’s because we move a lot of data around among servers.