Apart from CS868, I had not seen other HDMI TV sticks based on AllWinner A31, the main reason being the performance to price ratio, with RK3188 devices cheaper than AllWinner A31 ones, and benchmarks such as Antutu showing better score for RK3188. 2D/3D performance is about the same as RK3188 (based on Antutu benchmark), despite A31’s PowerVR SGX544 MP2 GPU. So the only remaining advantage of A31 over RK3188 is 4K2K (UHD) video playback, which is probably why Measy called their A31 mini PC “Measy U4K”. 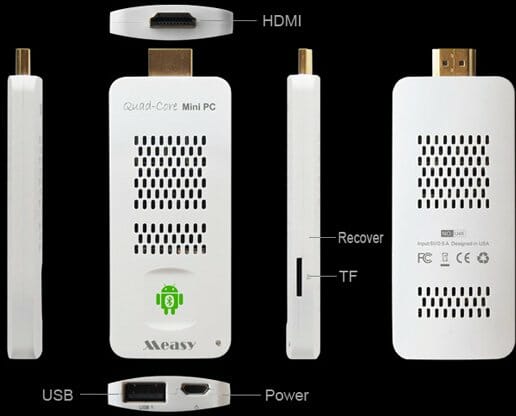 The device comes with a USB cable for power, a power adapter, a user’s manual and a warranty card. Depending on the seller, the package may also include a USB HUB, an HDMI cable, a Measy Air Mouse, and/or a HDMI male/female converter. Compared to CS868, Measy U4K only features 8GB NAND Flash (vs 16GB), but comes with built-in Bluetooth which is important if you have Bluetooth input device such as game controllers or wireless keyboard or mouse.

The device is available on Aliexpress for $96 including shipping, about the same as CS868. Since both devices are  more expensive than most RK3188 devices, so the main (only?) reason to get one is Ultra High Definition (UHD / 4K2K) video playback. More information may be available on Measy U4K page.

@TentativelyGoing
Sure. I’ll be there. 🙂