After Mele A1000G Quad, Mele has just launched another model called M9, still based on AllWinner A31 quad core processor, with an external Wi-Fi antenna, but no SATA support. 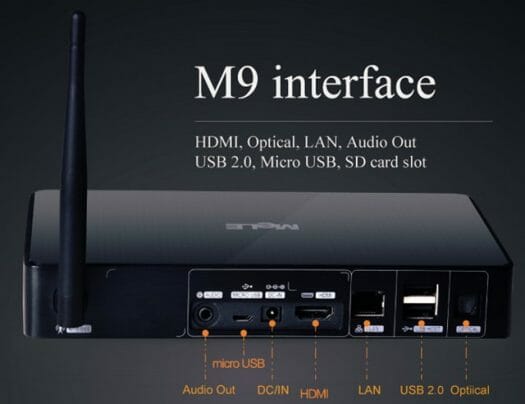 The device runs Android 4.1 with a customized “Windows 8” user interface, and comes with a 5V/2A power adapter, an IR remote control (show below), an HDMI cable, a user’s manual, and a warranty card. 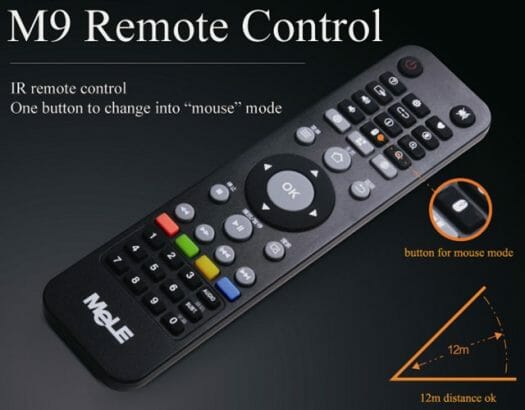 The remote above as a mouse button, to allow you to move the cursor with the arrow keys. Personally, I can’t use this feature on an IR remote without going insane (I tried with 2 different devices), so you may really to get an Air Mouse as well, if you plan to use Android.

Mele sells it on their Aliexpress Store for a whopping $188.88 including shipping, and other Aliexpress sellers seem to offer the set-top box for similar or even higher prices. Considering you can get the Mele A1000G Quad for less than $140 on their store that seems very steep price for just an external antenna, and a RK3188 based set-top box with similar features is available for less than $100. So I went to check on Taobao, and the price is much different:

It’s normal the price is cheaper in China, since shipping overseas adds to cost, but the price should just be $15 to $20 more expensive, not over $70. I’ve been told the Chinese and International versions have completely different firmware and APK, but I find it hard to justify the price difference, and there must be some other reasons Chinese readers might find out. There’s also another seller that sells a Mele STB, with similar specs, for $132.50 including shipping, which strangely features VGA and composite outputs. The seller confirmed it was not the Mele M9, and just told me it was model A7 (which does not exist)….

Even though RK3188 have a better overall performance, AllWinner A31 is better than Rockchip RK3188 when it comes to gaming, and supports 4K2K video playback (currently) downscaled to 720p or 1080p depending on your output resolution, as there aren’t any A31 based devices with 2160p HDMI output yet according to AllWinner. Mele STBs also do not come with built-in Bluetooth, which may be problematic if you want to use a Bluetooth game controller to play games. Some people have reported Mele A1000G Quad firmware is unstable, and I had problems with CS868 mini PC firmware, so firmware for devices based on AllWinner A31 may not be very stable just yet.

Why would anyone prefer this to the Mele A1000G Quad (which has a SATA interface, but only 8GB flash but otherwise seems identical)?

does it has an on-board battery for RTC(real time clocking) so the date and time does not change when you power goes off and on again.
I was searching for STB that has this feather for a long time but with no luck, could you help me?

@Mohamed
Sorry I don’t know about this particular device. Most devices seem to rely on getting the time from the net (NTP).

@Alfredo I am sorry to tell you but yes it does supports usb gamepads and personally i have for my kids Shadowgun installed and works flawless with ps3 usb gamepad!Don’t spread nonsense unless you tried every possible options to make things work and with a little research you can find easy and good solutions ,don’t expect all the features working on the box right out of the box because it won’t,you have to deal with it on your own!Good for movies if you use xbmc and games like Nova3/Modern Combat4 /Shadowgun etc…..I think this is the best android tv box… Read more »

hi. can i make copy paste on melle m9?