Mele A1000G Quad is an Android set-top box featuring AllWinner A31 quad core Cortex A7 processor with 2GB RAM and 8GB Flash. You can check the full specifications in my previous post. Eddy Lab got hold of an engineering sample with a similar model but without SATA that looks like A3700 [Update: Model name is apparently G39A04], and he, or they, took a few pictures, and tested the device (Link in Korean). I’ll re-post some of their unboxing pictures, and share some of their screenshots and benchmarks in this post.

The device comes with a 5V/2.4A power adapter, an HDMI cable, and an IR remote.

The device features an Audio out jack, a micro USB socket, a power jack, and HDMI connector, an RJ45 Ethernet connectors, 3x USB host ports, SPDIF output (Optical), and an SD card slot. It’s very similar to the original Mele A1000 except VGA and AV ports are missing, as Mele considers it is an high-end STB, and people who buy this device are likely to own an HDMI capable TV. There’s also a hole to access a recovery button on the bottom of the enclosure.

They also took several pictures of the actual board, and we find out the Wi-Fi module is based on Relatek 8188EUS, the 2GB RAM is composed of 8 Hynix chipset, the Ethernet phyceiver is Realtek RTL8201CP, the PMIC is AXP221, and according to another poster, the 4-pin connector on the bottom right in the picture is the UART (Left to right: 3v3, Tx, Rx, Gnd). Since u-boot and Linux source code for A31 is available (except some parts), this should make a fun hackable Linux platform to play with.

Mele has designed a customized, with a Windows-8 style Home Screen, user interface for their A20 and A31 based media players. 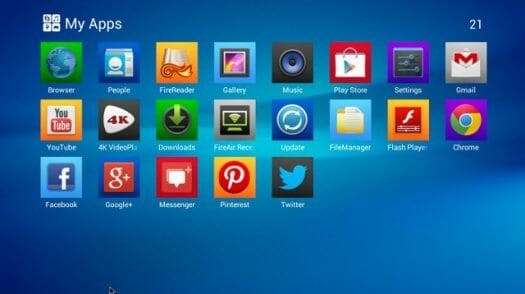 Eddy Lab then went through all the Settings menu, where we find connectivity options for Wi-Fi including Wi-Fi Direct and WPS, Ethernet, Wi-Fi tethering and hotspot, and more, but there’s no Bluetooth submenu. The Sound menu allows you to select PCM, SPDIF or HDMI pass-through, and the display menu will let you adjust brightness, contrast, saturation, and select several video output modes between 576p and 1080p60. 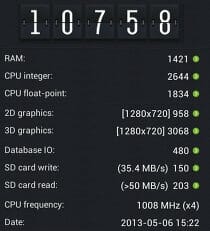 They also tested Wi-Fi performance with Benchbee, and achieved 19.2Mbps download speed, and 48.2Mbps upload speed, I assume with the router just right next to the device.

Despite the CPU benchmarks, they report that applications such as the Chrome Browser feels very fast on this device.

I think you mean 2GB of RAM and 8GB of flash storage.

I suspect that the lack of VGA and AV output is more that it isn’t part of the SoC so would require and external solution and increase the cost.

@The Cageybee yes, A31 doesn’t have vga and av output.

Exact… the SOC dont have direct support for analog output, and no SATA too.
This pictures look like a early sample unit.
The final product has been delayed until the end of May.

For A2000G its linux compatible?

@Israeru
If you mean A2000G (AllWinner A10 version), then yes, you can install Linux.