The “Plug” is a device with an Ethernet connection, and a USB port that allows you to connect up to 8 USB drives, and access those in a unified fashion from all your devices. It’s a bit like dropbox, except you are in charge, and the price per GB is much cheaper than cloud services. The Cloud Guys have launched a kickstarter campaign that has already received over $220,000 in pledges after just over two days.

The Plug technical specifications are as follows:

When you watch the promo video above, it does seem like a neat solution, but functionalities do not look that much different from what you could achieve with something like OwnCloud. The developers, however, explain it’s different, as “Plug manages all of your data for you. Not only the contents of a specific folder”.

Nevertheless, it appears to be a good solution for people that are not technically inclined. You just need to install an app on your devices, connect the Plug to your router via an Ethernet cable, connect an hard drive to the USB port of the plug, power the device, and you’re good to go. 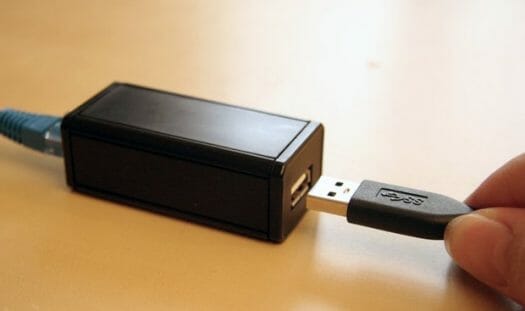 Main advantages of this system according to the developers:

The last point may partly explain the success of their campaign as PRISM media coverage may have people thinking about not storing their data on third party services. Communication between devices takes place via a private and encrypted VPN (asymmetric encryption based on RSA-2048/SHA-1 keys).

All your files are storages in the hard drive, unless you want to make them available Offline. You can also share folders with others. One important limitation is that the Plug only supports one user, and multiple users (aka family) support is planned for later, a few months after shipment.

You can pledge $69, plus $10 for shipping to anywhere in the world, to get the Plug (hopefully) delivered to your door in December 2013. Beside the Kickstarter page, there should eventually be more information available on http://meetplug.com.

Don’t the Pogoplug devices do the same thing,and at a cheaper price?
http://pogoplug.com/devices

I’d be interested to see how to do something like this with a Cubieboard (or maybe even Raspberry Pi); similar (/lower) price but a lot more flexibility. Seems like owncloud may be a bit resource intensive for cubieboard though:
https://groups.google.com/forum/#!topic/cubieboard/pDFaXZdpXLw

@Joe Bucks They address that in their FAQ – http://www.kickstarter.com/projects/cloud-guys/plug-the-brain-of-your-devices#project_faq_62136 “PogoPlug, Iomega, or Synology devices are Network Attached Storage (NAS) devices. They add a new folder or virtual hard drive in your computer, and make it accessible from all your devices. Owncloud works the same. This hard drive or folder is yet-another-memory, a separate place where you have to copy, move, your files into. So at the end of the day, if you use these solutions you still have to constantly manage and figure out where is your data. The main innovation in Plug is that it manages all of… Read more »

No powerplug on the Plug device. I wonder how that works.
If the Plug is on a DSL or cable connection, and you’re outside, you’ll only get a few Mbps access speed your “TBs”.
Sounds expensive for such a device. It looks more like a 19 USD DX.com gadget

how is this better than plugging your harddisk into your router/modem? Is is the software that Plug providers?

@Sander
They provide a power adapter, but they don’t seem to show power cables in any of their videos.
Dimensions in the specs are odd, much bigger than the actual device shown. From outside I’d actually get 512 Kbps maximum, so it would be quite slow for me.

It’s an x86 processor (AMD Geode? VIA x86?, don’t know) so $19 would be hard. 🙂
Everything is encrypted, and a low-end ARM router would not be able to provide this level of encryption at a decent throughput (I think).

I’m also quite confused as to why the device went viral.

@Sander
The article mentions that a power adapter’s included (which is a shame POE would be nice, but not enough for 8 HDDs?).

@Jean-Luc Aufranc (CNXSoft)
It sounds like it configures a RAID with all the HDDs?

Pogoplug is a similar service, but it it relies on a third-party backend (Pogoplug Corporate) to actually do anything. When Pogoplug screws up, your device doesn’t work. You can re-flash a ‘plug, but that defeats the purpose.

You can do something very similar to this product on a Raspberry Pi, or on a Synology box – but both those solutions are more for tech people. This looks to be plug it in and go.

Seems like a bad tradeoff to favor bandwidth which is relatively expensive and slow for storage which is relatively cheap and fast. Especially home internet connection upload bandwidth. Also no data redundancy although expect them to offer cloud backup for a price. It’s not clear how the cache discriminates so if you want to take files somewhere you don’t have internet then you still have to manage your own data, lest you be screwed over by their algorithm. But I’d rather see more work being done on Syncany and SparkleShare.

You can buy the hardware for $40. http://www.shopaddonics.com/Itemdesc.asp?ic=NASU2&eq=&Tp=
Of course, you’d miss their complete software stack which is the key selling point here.

However, after kickstarter, they target a $150 retail price for “The Plug” which looks way too high.

@onebir
I’ve been working on something for the pi, but effectively more or less gave up.
pi is armv6, which gets less and less support from mainstream Linux distro’s (no fedora 19 for armv6, Ubuntu dropped v6 support more than a year ago).
Also a single usb is not really nice performance wise.

There is much better hardware with only a slightly higher pricepoint.
Still peeking at what hw I will continue to work on; maybe dig up my mele as it has sata

@FransM
Ah, SATA rara avis of ARM devices ports. I’m alway a bit suspicious of USB HDs; always seem to run into minor problems with mine (not mounting/unmounting). Quite possibly some incompetence on my part…

If you can come up with something for mele, it should work with some spare processing power &/ memory on Cubieboard2/Truck 🙂

@onebir
I worked on amahi and also briefly played with it on the mele iirc (it has been a while).
Basically if the board can run Ubuntu/arm it is possible to get amahi on it.
See http://www.cnx-software.com/2012/07/04/amahi-6-1-for-ubuntu-12-04-released/

@Joe Bucks
I thought the same thing. A modded PogoPlug definitely would But a normal pogoplug requires cloud space, at a cost. I have a pogoplug for $20 and it’s sitting unopened. I should open it and check the speeds. There are also tutorials all over the place on how to put linux on it.

Thanks for your comment. We are the creators of Plug.
We’ve just figured out that the dimensions announced on Kickstarter *were* wrong.
Real dimensions of our device are 70 mm (L) x 35 mm (W) x 25 mm (H).

Thanks for providing us the insight!

Hi everybody, We are the creators of Plug. We love to see our project on CNX! Plug is much more than a Raspberry Pi with Owncloud, a Synology NAS or a PogoPlug: it’s a solution to make all your devices use *exactly* the same memory. Innovation is not much in hardware. As you pointed out, similar hardware can be found on the net easily. Selling you another linux board would be pointless now that Raspberry Pi is on the market. The innovation of Plug is in software. We went back to the basics: – If you buy storage, it’s because… Read more »

@MeetPlug
Thanks for passing by… I’ve updated the post with the right dimensions.

love this 🙂
But we’re convinced that the best UX should be invisible to the user.

@MeetPlug
I think the overall idea is great, so you can just insert a drive, and your storage space is “automatigally” increased. It just took me a little while to understand that it’s actually entirely transparent to the user.

I’d assume you only extend the user’s directories (like My Documents, Desktop), and any files installed in system directories like “C:\Windows”, or “C:\Program Files” always stay on the actual internal drive, or this could negatively affect performance.

It’s too bad this thing turned out to be garbage…it was delivered way late, half the things they said they were going to include or change never happened, and it generally kinda-sorta-maybe worked for a while.

The website for the company is still up but there’s little activity, and some questions on the old blog posts asking “Are you still there, Lima?” (Plug changed to Lima after some sort of minor legal scuffle where Plug was already in use.)