Since it’s release in July 2013, Google Chromecast HDMI TV stick has been very popular thanks to its low cost, and despite of its lack of feature, it does what it ‘s supposed to do – multi-screen experience across mobile devices and large screen displays – reasonably well. A Google Cast API preview was released at launch time for both the receiver (Chromecast) and sender (Android, iOS or Chrome) but the license terms prevented developers to release apps without written permission by Google as the API could still evolve. This restriction has just been lifted, as Google has now officially released Google Cast SDK for Chromecast and other upcoming Google Cast devices. 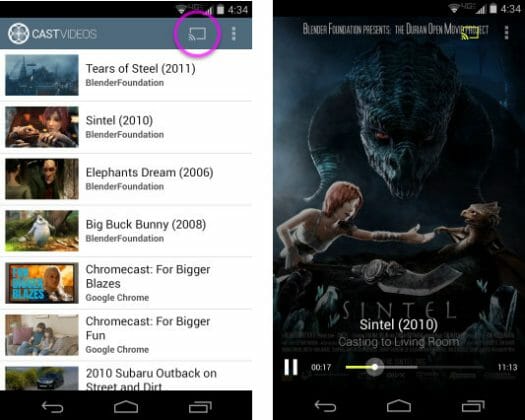 The Sender SDK is available for Android, iOS, and Chrome on the sender side, and the Receiver SDK allows you to run an app on the Chromecast. Google claims the Google Cast SDK is simple to integrate because there’s no need to write a new app, and developers just need to incorporate the SDK into their existing mobile and web apps.

The Sender SDK handles the discovery of Google Cast devices, the establishment of a secure channel between devices, UI controls, and sender-receiver messaging. The Receiver SDK allows to run a web app using the “Styled Media Receiver” (CSS styling + HTML5 video playback), or “Customer Media Receiver” which offers more control, but is more complex to develop.

Google provides several sample Sender apps for iOS, Android and Chrome including one called CastVideos (See screenshots above) in Googlecast github repository, as well a design guidelines for both receiver and sender apps.

Chromecast devices have already been updated to support the Google Cast SDK. Support for iOS and Chrome are available now, and Google Cast SDK for Android is currently being roll as part of Google Play Services 4.2 update.

You can find all you need to develop apps for Chromecast on Google Cast developers site.

According to the discussions here it does not sound like Google’s Chromecast SDK is compatible with GPL?

So it looks like many of the restructures still remain, kind of like for apps for Apple TV and old Google TV