Most devices now feature Wi-Fi modules capable of handling 802.11 b/g/n at 2.4 Ghz (and 5 GHz for dual band Wi-Fi), and newer devices and routers boast 802.11ac connectivity @ 5GHz with increased bandwidth (up to 1.2 Gbit/s in theory, maybe around 400 Mbit/s in practive), and in some case increased range with  beam-forming. But thanks to an article on EETimes, I’ve learned there’s another upcoming Wi-Fi standard called 802.11ah operating in the 900MHz range, with data rates from 150 Kbit/s with a 1 MHz band to as much as 40 Mbit/s over an 8 MHz band, lower power consumption, and a least double of the range of a typical 802.11n device,capable of covering an area of about 1 km2. The target applications are sensors networks, backhaul networks for sensor and meter, and extended range Wi-Fi, as the standard allows long range and more clients at low bitrates.

This new Wi-Fi standard will compete with other sub 1GHz wireless standard such as Zigbee, and Z-Wave, and it seems to have similar applications as Wi-Fi 802.11af standard operating in the TV white band. Companies such as Broadcom, CSR, Huawei, Intel, LG, Marvell, NEC, Panasonic, Qualcomm, Samsung, and ZTE are participating in IEEE 802.11ah standard which is expected to get ratified by the end of 2015. If you want to learn more about technical details, you could read a publications entitled IEEE 802.11ah: A Long Range 802.11 WLAN at Sub 1 GHz by the Department of ECE and INMC from Seoul National University. 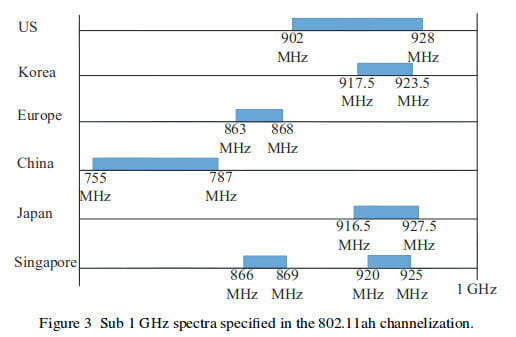 A Greek company, Antcor, will demonstrate its 802.11ah DSP block supporting 4×4 MIMO for home gateways and industrial automation networks at Mobile World Congress 2014, and the first 802.11ah SoCs should hit the market before the end of this year, using the draft specifications.

Article about setting up the expensive Odroid* as a 802.11ac router in the Feb edition:
http://magazine.odroid.com/
*I guess because it’s the only one with USB3.0? Anyway 802.11ac adapters still seem very rare.

I don’t see 11ah gaining much traction since you need all of the different regional antennas at 900Mhz. Gains from using 900Mhz aren’t likely to offset the costs of the different antennas. Much easier way to get low power is to use existing wifi chips that have Bluetooth Low Energy already integrated.

I sure hope they DON’T get the standard, as it looks like they want to be able to use the entire frequency block for as little as 1 device. This band was NOT made for that. Max channel width should be limited to 1Mhz per device, and no multi-channel use!!!! This is for sensors, not porn!!! (I hate bandwidth hogs!!!) Plus even with what they have proposed, it’s not going to be very low power friendly. :-/ Jon, as for antennas, the place I work at, handles every country world wide, and you just have to make everything based on… Read more »