[Update: See comment below. There will be two version of the Samsung Galaxy S5. One with Qualcomm Snapdragon 801 Quad core SoC @ 2.5 GHz, and the other with an Exynos Octacore processor @ 2.1 GHz]

Samsung has unveiled the expect Galaxy S5 smartphone at Mobile World Congress 2014. It’s not based on any new Exynos processors however, as it appears to feature the Qualcomm Snapdragon 801 SoC, an update of Snapdragon 800 with a higher CPU clock (2.5 GHz), GPU clock (578 MHz) and support for eMMC 5.0. The phone is quite a major leap compared to Galaxy S4, but the company has added an heart rate monitor, a finger scanner as well as LTE-Advance, and 4K video recording. 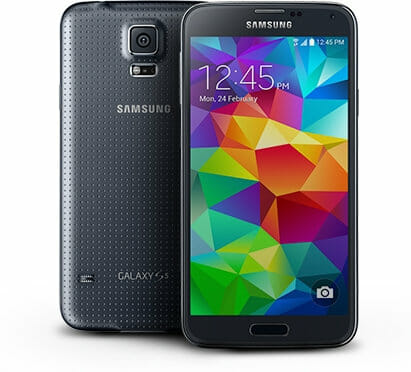 The phones run Android 4.4.2 (KitKat) with specific apps and features such as S Health 3.0, Quick Connect, Private Mode, and Kids Mode. They also have Download Booster that combines LTE and Wi-Fi 802.11ac download speeds. I usually find the brightness of my phone display to high at night, and it feels quite uncomfortable, so I’ve installed an app to dim the display, but Samsung has added a “super dimming mode” to do just that with the hardware, which should also lower battery consumption. Talking about low power consumption, the company also introduced Ultra Low Saving Mode, which turns the display to black and white, only runs the hardware required for SMS and calls, and allows 24 hours standby time when you have 10% battery left. 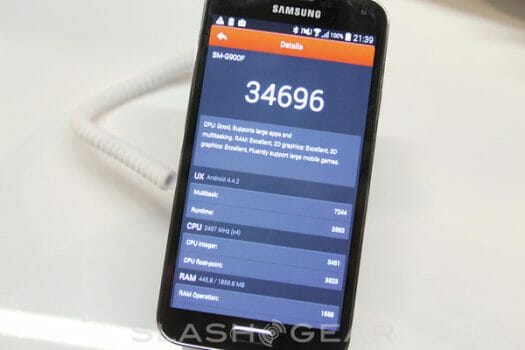 Slashgear managed to get some Antutu benchmarks, and the Galaxy S5 gets 34,696 points, one of the highest scores ever for a smartphone. Antutu reports the device is running Snapdragon 800 @ 2457 MHz, but AFAIK, Snapdragon 800 can not be clocked as high, and it must be Snapdragon 801.

The company has not disclosed pricing just yet, but the device should be available in 150 countries, starting on April 11, 2014.

You can watch Samsung MWC 2014 event recording if you please, including Galaxy S5 announcement, as well as the new Tizen based Gear smartwatches, and Gear Fit activity tracker. Although Samsung knows how to make great phones, they don’t seem to know how to trim videos, as the actual presentation starts after 43 minutes…

Update. There will be Exynos Octa (2.1Ghz) version according to Samsung: http://global.samsungtomorrow.com/?p=34402 We are still waiting for “Exynos Infinity” related announcements.

The company has just announced SDK for the Galaxy S5, their Tizen Gear smartwatches, and the Galaxy Fit activity tracker.
http://www.samsungmobilepress.com/2014/02/26/Samsung-Unveils-SDKs-for-New-Devices-at-MWC-2014-1