Nvidia Jetson TK1 development board powered by Nvidia Tegra K1 quad core ARM Cortex A15 processor and a 192-core Kepler GPU has started shipping, and some people have already received theirs, including Michael Larabel (Phoronix) who ran some benchmarks on the board that comes pre-loaded with Ubuntu 14.04 LTS.

We already had some benchmarks comparing Tegra K1 to ARM peers on Android, but it’s the first time Linux benchmarks are available. The benchmarks seems to only involve CPU and FPU, and probably not the GPU at this point, but the results are still interesting, and Michael also pointed links comparing Nvidia Tegra K1 development board performance to some Intel Core i5 based PCs, as well as a platform based on an Intel Celeron J1900, a quad core processor part of Bay Trail Desktop family.  The later is most interesting as we compare systems with similar power requirements. Nvidia Tegra K1 is said to consume up to 11W, and Celeron J1900 is reported as having 10W TDP. 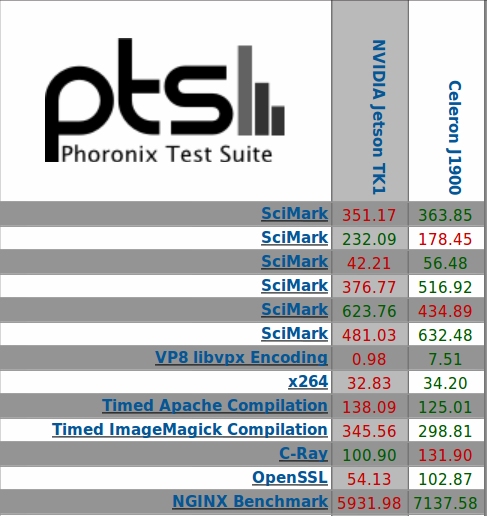 There’s no denying the results vary greatly depending on the task, and overall the performance of the Intel SoC still seem faster, but Tegra K1 and Celeron J1900 are clearly in the same class for most of the tests, and I’m not convinced the performance difference would be noticeable in daily use. There are however two tests that stand apart: VP8 libvpx Encoding, and OpenSSL, where Intel J800 is respectively nearly 8 times and twice as fast Tegra K1. This is most probably because the software has only be optimized for x86, or the libraries used make use of some hardware block(s) on the Intel processor, that’s not supported (at all or yet) by Nvidia Tegra K1.

Phoronix also monitored Tegra K1 during testing, and on average is was below 40 degrees Celsius, never going above 42. Jetson TK1 is however fitted with an heatsink and a fan which helps with cooling.

Eventually, it would be interesting to get some benchmarks about 3D graphics and GPU compute (OpenCL) capabilities of the Kepler GPU found in Tegra K1, as it’s touted as the key selling point of the platform.

http://en.wikipedia.org/wiki/VP8
First I’d heard of it…

Well this is nice of course but I’m really looking forward to the Denver based Tegra K1. That one might even be the first 64 bit ARM you can get.

@onebir
And yet, provided you visit online video sites or watch embedded videos, you’ve unknowingly been using it for years…

@Marius
Agreed. Cannot wait for some AArc64 (ARMv8). And I hoping the board will be supported by Linaro or Fedora, otherwise we will have more struggle to keep things working.

@olonix
I think so, and that’s the worst case. But I assumed the 10W TDP for Celeron J1900 also included the GPU since it’s also an SoC with CPU + GPU Chipset. Or does Intel only includes the CPU in their TDP numbers?

OpenCL benchmarks will be available later.

My J1900 benchmark 😀 It’s quite handy platform and SoC. The next generation – Braswell must have some improvements, but still. Quad core fanless + 16 GB RAM…. and if you need you can add nVidia GPU via PCIe x1 🙂