MYIR MYD-IMX28X development boards and MYC-IMX28X CPU modules had been announced in May 2014, but I’ve just found out about them via the company’s newsletter. The CoMs are powered by Freescale i.MX28 ARM9 processors (i.MX283 or i.MX287), feature 128 MB RAM, 256 MB Flash, and connect to a baseboard to make the development boards. Target applications include smart gateways, human-machine interfaces (HMIs), handheld devices, scanners, portable medical, experimental education as well as other industrial applications.

The main differences between i.MX283 and i.MX287, are support for only 1 Ethernet port against 2 for i.MX287, and the latter features 2 CAN buses. The company provides an SDK with u-boot, Linux 2.6.35, and relevant drivers for the module.

The development boards have the following hardware specifications: 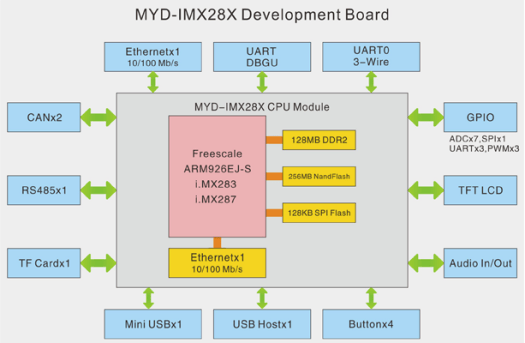 Publicly available documentation is limited with only Freescale i.MX28 datasheet, and MYD-IMX28X board and MYC-IMX28X module simplified datasheets with overview of the boards, header pinout, and a list of document and software packages available for the board. U-boot, Linux 2.6.35, and drivers will be provided with source code, as well as some code samples to control various peripherals (SPI. I2C, touchscreen, LCD…) and a Qt demo. MYIR also provides 4.3″ and 7″ resistive or capacitive touchscreen as option for $60 to $99.