Cloud Media, previously known  as Syabas, has been selling Popcorn Hour media players based on Linux for several years, but with OpenHour Chameleon the company is about to launch their first Android media player powered by Rockchip RK3288. The device is similar to other RK3288 TV boxes, except it does not come with internal storage at all, and instead boots Android 4.4.2 from a provided 8GB SD card, with later plans to have support for Linux operating systems such as Ubuntu. Another particularity is that they’ll use an aluminum casing for better heat dissipation of the Rockchip RK3288 processor which can get pretty hot…

The company claims you’ve also be able to change the included 8GB SD card, with a larger SD card ( up to 32 GB) to load your OS of choice, be it Android, Ubuntu (TBC) or another. That should simplify firmware upgrade, as you won’t need to use Rockchip Windows or Linux tools to upgrade the firmware, and you can simply re-flash the SD card, or use another one. They have not mentioned if they’ll support OTA however. The box will run XBMC, and the company claims True-Dolby and HD-DTS pass-through are supported. Bluetooth and Wi-Fi will be optionally supported via external USB dongle(s), and other optional accessories include a Bluetooth game controller, a wireless remote, keyboard and air mouse. 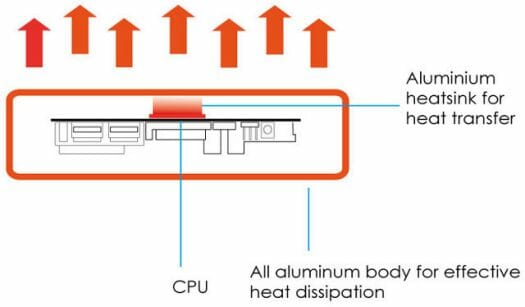 It’s not clear when the box will be available, but OpenHour Chameleon will sell for $149. You can find more information, and register your interest on Cloud Media’s OpenHour Chameleon page. You want also want to check out their Wiki (under construction) or forums for more details.

Ironic name considering how (NOT) open Popbox / Popcorn Hour was!

CloudMedia/Syabas is infamously know for being anti open source 🙁

Hope that the company will change their philosophy and actions here!

I have two playes of them:
The oldy A110 and the C-200.
They do the job well on Reading movies from internal disk the rest you need to dig a bit, but still it’s a nice product.

Does anybody know if this device is usb debuggable, such that you can develop directly with it connected to eclipse or android studio? I’m asking because I’ve experienced issues in the past with devices like this where you can’t, which makes using them for development way more difficult. Thanks.

@Bill Hatch
Don’t all devices with a USB OTG port support USB debugging?
If so, this one should work for application development.

Hi
Are you planning on do a review of this box ? Im specially interested in the boottime – whether it will be high, as it uses a SD card to boot from ?
Regards, Claus

@Claus Dittrich
They planned to send me one, but they must have changed their mind. So I won’t review it.
RK3288 devices with fast eMMC boot in 20 seconds, with slower eMMC in 40 seconds, so maybe a Class 10 SD card would boot in 40 seconds to one minute (TBC). Of course, if you take a cheap class 4 SD card, boot time will take forever, and the system will feel slow.

@Jean-Luc Aufranc (CNXSoft)
Yep thats what I thought. the main reason for my interest in this box is the dual boot possibilty.i thought of getting deepin linux as second boot. i have tried to find out if i could get chrome os as standalone s/w but i couldnt find it to download. apparantly thats not possible.
thanx for your very thorough reviews thumbs up from me.claus