ARM based HDMI TV dongles have been available for over two years, mostly running Android, but the community has managed to install Linux desktop operating systems such as Ubuntu or Debian on these tiny gadgets with some limitations. But now that Intel is making low power SoC for tablets, at least one company has decided to make an HDMI TV stick powered by Intel “Bay Trail-T” Z3735F/G quad core processor, which can run Android, Windows 8.1, and Linux based desktop operating systems such as Ubuntu. 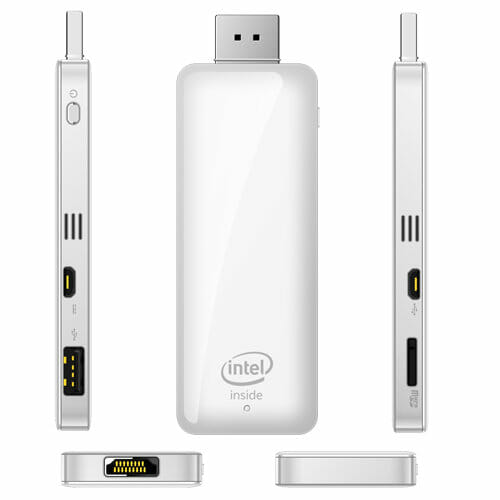 Android and Windows 8.1 are supported according to the specifications, and Linux/Ubuntu is vaguely mentioned, so it may not be fully supported at this time, other Bay Trail-T mini PC can run Ubuntu with some caveats, so hopefully issues can be ironed out, and we can finally have an HDMI stick running Ubuntu / Debian with full 2D/3D GPU acceleration, and video hardware decoding support.

The PCB name is DAONH1MB6A0, and appears to have been designed by a Taiwanese public company called “HannStar Board Corporation“.

MEEGO-T01 / APM-D01 / Meegopad T01 (not sure of the name) is not available for retail yet, but it’s listed on Alibaba, as well as on Shenzhen APEC Electronic’s APM-D01 product page. I could not find any price information, except the very vague, and unreliable, “$1 to $70” on Alibaba.

All the cool kids write their own with asm, semi-nerds compile with already existing compilers. 😉

Ah, but does it run MeeGo?

@anon
so i guess i am a noob then o well

@adem
Heh, aren’t we all, I bet pretty much everyone has at least one blob system for use/backup.

Seriously though, pretty cool overall, too bad Intel is one of the bad guys, so nobody respecting fair business practises should favor other than x86 archs.

I found it on aliexpress under APM-D01

@Alex
A new seller selling a product without even a real product image, I’m wondering if anyone is willing to give em a try.

@qwiqooq – I took a gamble on it. Less than 20% chance in my mind I get anything.

@Chris @qwiqooq Please update if you receive it. Feel free to hit my G+ up if you do: https://plus.google.com/u/0/+AlexBurton/posts

The seller must be happy, already sold 76 in three days !

Can I connect this to projector which have a HDMI port and project?

@srikanth
It’s just like a standard PC with an HDMI output, so I don’t see why It should not work.

@Alex
Got a message from seller over the weekend. Does not sound like it is coming. I’m not willing to wait for it, so I will cancel after the guaranteed delivery time expires.

“Hi Chris ….,
How are you ? Thanks for your interesting into our products. Due to our heavy sample request for a lot of customers, now our sample shipping time will be sheduled to next middle month ,so if it’s possible we can delay the shipping time? Sorry for that . “

@Chris
I think you can request an extension of the “guaranteed delivery time”, and still be covered with Aliexpress protection.

That device has gone viral, so I’m not surprised they are having issues filling demand.

I’m also on the waiting list for a sample of this little stick. I’m pretty excited! Based off the emails they will be mass produced starting in mid-November. From what I understand the Meego-T01 will have either Android or Windows 8.1 available. I’m not yet sure if they will ship dual booting or not. I’m planning on remixing a Ubuntu livecd to run properly and install properly on this stick. Currently there are only a couple of distro’s that MIGHT boot on it, but won’t have working wifi. It needs a 32-bit bootloader and 64-bit os. The hardest parts should… Read more »

They posted a black-color version with dual system (Android and Windows) of this stick. It has real product images (and running) so I guess you could say things are getting pretty serious here.

keep in mind that the Black version has 1 micro-usb, while the White ones has 2 micro-usb

This store on AliExpress has promotion and real product images. Check them out if you are interested:

Personally I’m waiting for a Windows mini PC in the form factor of the Rikomagic V5.

I’m looking for an analysis of the partitions on this system. I got a similar device released by Lemel in Taiwan. They decided not to include Android in the system and the BIOS will only run a 32bit installer so I’m unable to install 64bit windows on it.