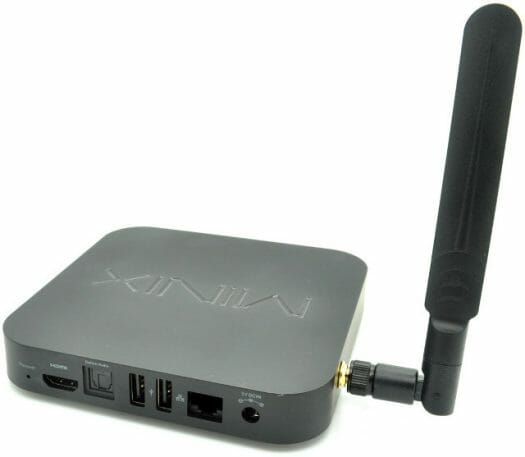 The rest of the specifications are exactly the same as NEO X8-H:

The device runs Android 4.4.2, and I’ve been told it would ship next week (Monday). I hope the firmware is better than the current version available for M8S, as I’ve had to postpone my review due to too many issues, including one hardware (power supply) related problem.

MINIX NEO X8-H Plus currently sells for about $159 including shipping [], instead of $149 for NEO X8-H. I got the information via Gearbest, but it’s also available for purchase on GeekBuying, and Ebay for now.

They were very strong, looking forward to it and hope that is compatible with the buildroot from Amlogic !

@CSylvain
tell me how to test the buildroot, i already get the sample, i will test for you guys.

“IMPORTANT REMARK : NEO X8, NEO X8-H & NEO X8-H PLUS ARE ALL BASED OFF THE SAME FIRMWARE. WE GUARANTEE LONG-TERM FIRMWARE SUPPORT FOR ALL THREE DEVICES. THE RELEASE OF NEO X8-H PLUS WILL HAVE ABSOLUTELY NO ADVERSE AFFECT ON THE TECHNICAL SUPPORT & FIRMWARE UPDATES WE PROVIDE FOR NEO X8 AND NEO X8-H.”

Minix support. Hehehe that a laugh.

It seems they stopped supporting firmware updates for all their devices before x7 after a year.

What makes us think the X8 and X8H will be different.

@Eric
To find out, I need an update of this box, even an Android version will suffice to look “HEXA” bootloader, and thus know the name of the card (BR2_TARGET_UBOOT_BOARDNAME).

I just can get the stock firmware for this right now. don’t really understand well for what you are asking.@CSylvain

I managed to download an update : http://www.minixforum.com/threads/neo-x8-h-plus-stock-firmware.2456/
And after checking, I have the good news that it is compatible with Linux (buildroot) ! meson8m2_n200_release_defconfig

jumpingjuniper :
Minix support. Hehehe that a laugh.
It seems they stopped supporting firmware updates for all their devices before x7 after a year.
What makes us think the X8 and X8H will be different.

They just released the Kitkat firmware.
Don’t see other brands really updating the RK3188 devices except MINIX.
They are just superb in terms of software support.

Hi
I am planning to buy Minix8 and i have a large library of movies on external hard disc , all in DIVX format
Does the MINIX8 support theDIVX format? Please somebody answer!

@katzka
I had no problems playing DivX videos on it.

minix has very good products but with a little bit steep price, for Half the price the CX-S806 with the same aml S812 is a safer choice to make

for the price if it would have a tuner it will be great, I assume I’m waiting for DV7810-S2 the only DVB S2 that come with aml s812, but it’s taking time to arrive, in the meantime here is the First S805 DVB S2 on the market, just spot it today on aliexpress