We’ll already been informed about Intel Bay Trail mini PCs such as NEO MINIX Z64, MeLe PCG03 and Meego Pad P01, but the first two are not available yet (MeLe mini PC will ship by the end of December), and Meego P01 sells for a ridiculous $251 on Aliexpress, and I’m not even sure it’s shipping. There’s now another option with 10moons D9i which goes for 499 CNY ($82) in Tmall, features Intel Atom Z3735D quad-core processor,  2GB DDR3, and 16GB flash, running Android 4.2.2 or Windows 8.1. 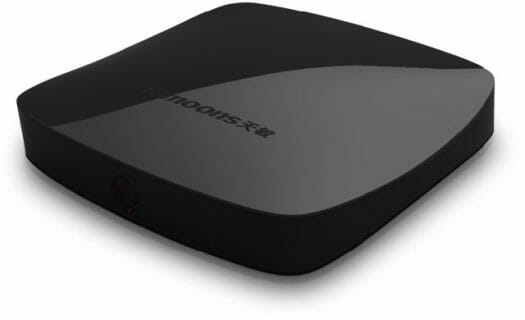 I understand the device ships with Android 4.2.2, but it looks like you can also download the BIOS and, hmmm… Windows 8.1, to install Windows from a 4GB or greater USB flash drive formatted with NTFS. It’s most probably an unauthorized copy of Windows, unless somehow Microsoft has also OK’ed Windows 8.1 with Bing on this type of device. In theory, you could also instal a Linux desktop distributions the device, but there may still be issues with Intel Bay Trail processors. That’s also a shame there’s no Ethernet port on this box.

Nevertheless, that means game is on, and Intel based mini PCs are now coming to market with the same price as equivalent ARM based mini PCs. A $80 device, in China should probably cost a little over $100 on Aliexpress once shipping and other fees are taken into account. More information may be available on 10moons iBox product page (Chinese).

Thanks to milkboy for the tip.

I just bought it and wait for shipping to Viet Nam

Nice. Let us know how your tests go B-)

@hoangdinh86
Does Tmall ship to Vietnam (and other countries), or did you use a third party service to purchase it?

This device has no LAN ,and a noisy fan in the bottom,but I think you can remove it when you get it.

Tmall and taobao dont ship direct to other country outside China. I use third party service to purchase with 7-10 day

for those who are interested, disasambled pictures http://bbs.10moons.com/forum.php?mod=viewthread&tid=70343&extra=page%3D1 anyways UPDATE: juz spoke with the seller directly they say cant install linux!!!!, only win8/android, cant boot from usb no bios, no bootloader (like grub) in the traditional x86 sense. although there’s the android recovery/bootloader and fresh install involve push win8 and sysmantec ghost file, delete the rest of android, then boot, vice versa and if you install win8, free space is 8.9gb. i wonder how the achieved that. i think ill wait, what other vendor solutions and X finger they ship with a proper bios/bootloader god d**mit, i was so happy… Read more »

Rubbish, tiny chainsaw emulating an fan, shader-based H.265 decode, <2GHz quad… Only thing going for it is support for legacy ISA for all those n00bs using already built binaries… Nothing but "users"… The humanity lacks MAKERS.

I don’t know, how can anyone use this devices with 16G storage, with windows 8?
I have a 64G SSD in my PC, and after a fresh windows install, about 20Gigs are used.

@David W
Oh noeh, did I get a hint of a fellow dev from your comment? 😉

Lots of complaints in feedback page. Such as fan noise, playback is not smooth, less on-line video contents.

I just got 1 but the instruction manual is in Chinese, how do I get 1 in english?

I just get one unit several days ago, I install win8.1 but i cannot change languaje of system from chinesse , iiiiiggg!!!!

Cannot log in – after settings try to login I get error 255. I had it replaced by supplier and came with same problem, any suggestions please.

@Manuel
In setting you will see a column that says ‘A’ – this is where you click to change language.

I have 10 Moons D9i, cannot use it as it shows error 255 when I put it on and after all the settings. I do not know how clear this problem