MeegoPad T01, also known as APM-D01, is a low cost Android 4.4 and/or Windows 8.1 HDMI TV dongle powered by Intel Bay-Trail-T Z3735F or G with 1 to 2GB RAM, and 16 to 32GB eMMC. It has become quite popular (for a Chinese product from an unknown board), and one seller managed to sell nearly 400 pieces of the 2GB RAM/16GB eMMC version on Aliexpress for about $130 shipped. But this morning, I discovered this Windows 8.1 HDMI TV stick was listed on DealExtreme for just $99.99 including shipping, and if you want the 32GB eMMC version, it would cost you $109.99 also including shipping. 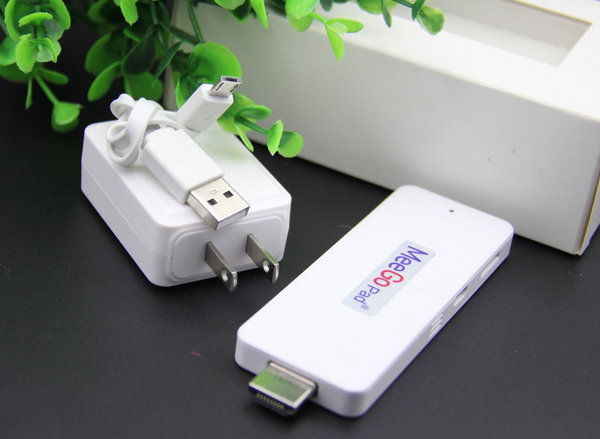 MeegoPad T01 specifications of the devices sold on DealExtreme:

The stick is sold with a 100~220V power adapter  and its micro USB to USB cable (60 cm). However, looking at DX page, it’s not clear at all if it comes pre-loaded with Android 4.4, or Windows 8.1, and whether a license is included (probably not at that price?). DX points to meegopad.cn, but everything is in Chinese, and I could not find T01 model. My guess is none of the nearly 400 persons who order APM-D01 / Meego T01 have received their device yet, as there’s no independent review. However, the manufacturer as posted a three part overview of the dongle on Youku, and Deadhp11 re-uploaded them on YouTube. I’ve included the Android/Windows 8.1 dual boot video demo below, where everything is controlled with a smartphone app.

So that would mean both Android 4.4 and Windows 8.1 are pre-loaded in the device, but I wonder how this could be possible with the 16GB internal storage version. Finally, as said previously with other Intel Bay Trail devices, Ubuntu / Linux distributions may not be fully supported.

@cnx
Do you know Chinese name of MeegoPad T01? I search Taobao, tmall but not found

shame on both its name and lack of usb 3.0

@6Hzzz
Yeah. I found it in taobao. Thank

I got confirmation on DX that it comes pre-loaded with Windows 8.1, and you can just switch to Android from the desktop.
http://club.dx.com/forums/forums.dx/threadid.1407535?page=1

I’ll have one of these sticks in my hand sometime around beginning to mid December.
They are probably using WIMBoot in order to keep the size of the Windows install down.
I plan on remastering a ubuntu livecd to boot/install with the 32-bit bootloader needed for baytrail processors.

I added some more videos that Meegopad gave me permission to repost on youtube. This time they are in english!

Hi,
on dx forum the’ve aswered a couple of questions.
http://club.dx.com/forums/forums.dx/threadid.1407503
They specified that you have to pay for an activation code for Windows 8.1

following this thread I’ve just ordered the 32gb version, will report asap (in in UK)

@bello.rock
this is funny answer
JonesDX:
“if you want to use the legal copy yes”

I got today a confirmation mail from dealextreme that my MeegoPad T01 (2GB / 32GB) is shipped.

I got the same confirmation.

So do I,
they confirmed just shipped today.

I received my device yesterday. It came in a plain box and looks slightly different to the pictures online. My device is black and the only text on the surface is “Intel inside”. Likewise the package (nice white box) has no identification. The “manual” inside just calls it a Mini PC Dongle. So I assume I have a MeegoPad T01. If it looks like a rose and smells like a rose … On power up it went into a Windows install operation that seems to have been based on an image file: c:\Factory\boot.wim – there is still a batch file… Read more »

I got my t01 two days ago. I’ve made some progress with remastering the ubuntu 14.04 livecd maybe next week I’ll be able to release a test iso that will be able to boot AND install the 32-bit efi through the standard ubiquity installer.

So far the t01 is a great little system!

Have you found any way of booting it off usb or dvd. I can’t find a way of setting bios boot order. I have made a recovery usb stick. It looks as though it is possible to make a backup image to a hard drive. I’d like to repartition the ‘disk’ to get back the space used for recover image (1/4 of the space), but I don’t want to do that until I know I can restore from media. So far I can’t do that.

@Bill
So you have to provide your own Win 8 license?? Or could you skip that and keep using it somehow?

Somebody found out something about RESTORE POWER AC after power loss? I’m having this device powered via USB from my TV and when I turn it off, the device shuts off as well (obviously). I would like that the device turns it self on after turning on the TV – going behind the TV and find this little power button can’t be the solution.

@TK
I don’t have such device, but my PC autostarts when I connect the power.
This is how I set it up: http://www.cnx-software.com/2013/04/05/how-to-autostart-a-pc-automatically-when-connecting-it-to-the-mains-power/

@Jean-Luc Aufranc (CNXSoft) Unfortunately there is not. Im shocked that there is no option for auto turn on after power loss or something like that in the BIOS! Because it works flawlessly with my TVs USB ports, but of course it shuts down when I turn off the TV. Then I thought: alright, no problem – put it on the normal charger and let it go to sleep after 20min and wake it up as soon I need it again. 2nd shock!!! Not possible to wake it up via USB (wired) keyboard or mouse. I tried everything. So you literaly… Read more »

Keep us posted on your success with Ubuntu….

Something similar to MeegoPad T01: Artway Wintel A8 for $99.00 with 2GB RAM/32GB flash, and they claim it comes with “Windows 8.1 with Bing TV Box”, probably unlikely to be an activated version based on the price.
http://www.aliexpress.com/item/free-shipping-Artway-Wintel-A8-Windows-8-1-with-Bing-TV-Box-Intel-Atom-Z3735F-Quad/32287855902.html

TK : Somebody found out something about RESTORE POWER AC after power loss? I’m having this device powered via USB from my TV and when I turn it off, the device shuts off as well (obviously). I would like that the device turns it self on after turning on the TV – going behind the TV and find this little power button can’t be the solution. TK : @Jean-Luc Aufranc (CNXSoft) Unfortunately there is not. Im shocked that there is no option for auto turn on after power loss or something like that in the BIOS! Because it works flawlessly… Read more »