Realtek RTD1195 is a dual core Cortex A7 processor with a Mali-400 GPU, supporting fast interfaces such as USB 3.0, Gigabit Ethernet, and SATA, as well 4K video decoding (including H.265) and output, and HDMI input. Despite all these features, it can be found in ultra low cost Android media players, so I was eager to find out if it’s as good as it looks on paper.  Thanks to GeekBuying which sent me M-195 TV box, I’ll soon be able to find out. Today, I’ll list the technical specifications of the device, and take pictures of the device and the board, before doing a full test early next month.

Hardware specifications as listed in the user’s manual and GeekBuying:

The device runs Android 4.4. This model does not have a SATA port, but everything else seems excellent, except the CPU/GPU which probably means it has potential as a media player, but would probably feel sluggish as a mini PC. Anyway, we’ll find out in the full review.

GeekBuying sent the parcel via DHL, and the device can be found in the generic “4K OTT TV BOX” package below that highlight features of the device like H.265, 3D video, HDMI input, 4K UHD support, USB 3.0, Gigabit Ethernet, etc.. as well as pre-installed apps like Facebook, Twitter, Skype, XBMC, YouTube, and Netflix. 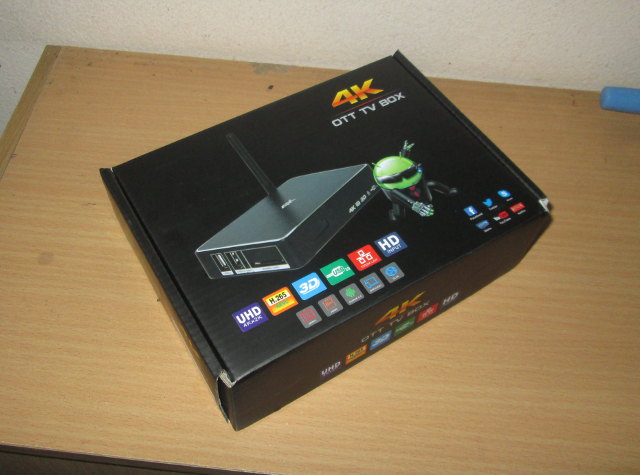 The front panel just has a window for the IR receiver and LEDs, as well as some logos. A USB 2.0 host port, a USB 3.0 port, and a full size SD card slot can be seen on the side of the device.

The rear panel features both HDMI In and Out ports, as well as AV output, optical S/PDIF, the Gigabit Ethernet port, the power hack, and a Wi-Fi antenna.

Simply remove the four stick rubber pads on the bottom of the case, and untighten the four screws to open the device.

There’s nothing much interesting on the bottom of the board, so let’s remove three more screws to take out the board.

There’s a thermal pad sticked on top of the processor, the eMMC, and the RAM chips with some extra tape. The four pins header on the bottom of the board could be for the serial console.

So I’ve taken out the thermal pad to have a clearer view. The processor is Realtek RTD1195DD, which controls two NANYA NT5CB256M16CP-DI DDR3 chips for 1GB RAM, and a FORESEE NCEFES78-08G eMMC flash (8GB), which I foresee (that was easy) would probably be slow like other eMMC chips from the company I’ve tested so far. The Wi-Fi module is Realtek RTL8723BS that supports Wi-Fi, Bluetooth, and FM, although the latter is not used in the box. The board name is 902_V3.0 manufactured on 2014/08/29. There are also four unsoldered connectors, but without markings it’s difficult to know what they may be for.

I’d like to thanks GeekBuying which provided this product for review, and sell it for $68 including shipping. Other shopping options include Amazon US, Aliexpress, and Ebay.

Many unanswered (and answered) questions about Realtek RTD 1195 on the Kodi forums http://forum.kodi.tv/showthread.php?tid=204918

Would be great if you could try to answer them all in your upcoming review!

Features to compare are H.265 and true 4K output.

Who actually manufacture the M-195 board and box?

Does the ethernet MAC address give you a clue?

@Harley
Was of course referencing the usage as an “media player”, not CPU powerhouse… As a media player both are supposed to support native 2160p/H.265, while all the other SoCs having all kind of nasty things happening for those.

Naturally the S815 might be the best overall (both as an media player with Android, and as a Linux desktop), but as for pure Android media player market, both might be pretty much on the same page.

i already have this box i only used it for about 20 min performance is not all that good but maybe firmware update might fix the problem.

@Gabe
I thought about that first, but the connector are not arranged the way way at all, EW902 use that board + a daughter board with connectors, but that seems odd.

@Harley
I’ll check that when I review it.

@adem
It could be slow because of the FORESEE flash used, on top of the relatively slow CPU/GPU.

Looking forward to this review…I have a lot of questions about how the HDMI in is implemented (mainly related to, can I plug a Chromecast in there to make this a Nexus Player with a slow CPU and more ports?), and I’m curious to see how the Miracast performs.

i have chrome cast here, i can test for you,before, i test to connect the apple tv and it can work well with 1080p.

also for miracast, it still lack the HDCP key, so be careful, sony and samsung device or similar who require the hdcp SHOULD Not work.

Tried with chrome cast, plug in the hdmi in port, and power the chrome cast from the usb port, lanucher the hdmi source app, and i can see chrome cast in my TV, and it show 1920 1080 60fps.

realtek = zero documentation, gpl violations and no software updates ever

@Eric
Thanks for trying that out for me! I was hoping it might have CEC support for changing inputs automatically, but it sounds like you need to open the HDMI Source app first.