That’s only a leak, but if true, the upcoming Sony Xperia Tablet Ultra would be a real beast with a 12.9″ IPS TRILIMINOS touchscreen display with 3840 x 2400 resolution, a Qualcomm Snapdragon 810 64-bit Octa core processor @ 2.86 GHz coupled with 6GB LPDDR4 RAM, and 64GB internal storage. 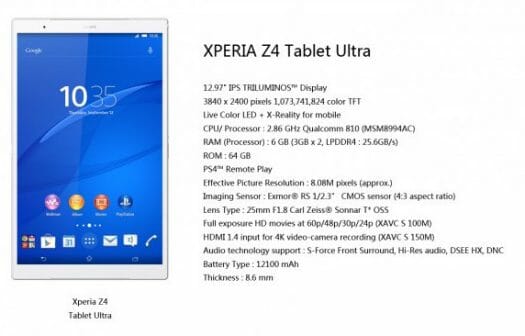 Sony’s tablet ould also come with an HDMI 1.4 input port allowing 4K recording up to 30 fps, which looks like an odd feature for a tablet. The battery capacity would be rather large as well as 12,100 mAh, yet thickness only 8.6 mm, which might be possible due to the massive screen. It would most probably run Android 5.0 Lollipop.

Via Mike Cane and Padnews.

6GB of RAM. This is what I would like to in development boards, 6GB of RAM, 25.6GB/s, AArch64. This looks quite a high-end product.

@davidlt
As well said by Jean-Luc, that’s only a leak.
I can’t immagine the real price if all these features are inside…Sony never has been cheap.

It makes not sense for Sony to implement 6GB before making 4GB standard in the new 64-bit Arm architecture.
Time will tell tho.

Look very good, size, resolution, triluminos, sd810… but price maybe prohibitive.
now hdmi input is a gold feature, sure to use the 4k display, maybe w/hdcp… but even without hdcp pvr recording is a dream feature! (odd no way)