Some Android games console are getting quite powerful, after the Tegra K1 based OBox, Razor Forge TV is an Android game console powered by Qualcomm Snapdragon 805 processor, and instead of running Android 4.4 or 5.0 for tablets, it’s running Android TV, and a separate app called Razer Cortex Stream will even let you play PC games on the console,  possible the same way Nvidia demonstrated at CES 2013. 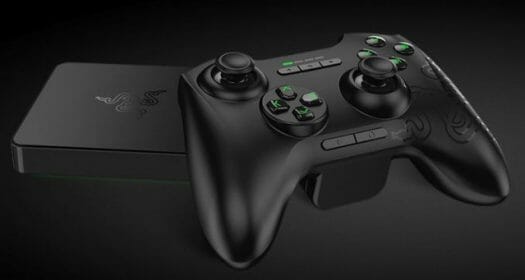 The console supports up to 4 wireless game controllers, as well as voice search via a mobile app. You can also use the device to stream music, movies, and other content from YouTube, Google Play, Hulu Plus, Netflix, etc.. since it runs Android TV. It can stream games via Cortex Stream., but it also supports Google Cast to stream media files from other Android devices.

The game console will sells for a low $100 in Q1 2015, but you’ll probably want to add a least a Serval Bluetooth game controller, which will bring the total price to $150. Serval game controllers can also be purchased separately for a not-so-cheap $80, and the company’s Razer Turret wireless keyboard and mouse combo sells for $130. Cortex Stream (beta) app for PC gaming on the device will be available in Q2 2015 for $40.

I want one, but without the expensive accessories.

Gaming aside, this seems to have the specs for a decent tv-box/NAS combo if it gets some suitable flavour of linux…

Looks like it’s time to sell all my other TV-BOXes… At this price, it’s hard to justify any of the Chinese boxes.

The D-Pad on those controllers are horrible.