Canonical announced its plans for Ubuntu for Phone over 2 years ago, and all that work may finally pay off, as BQ Readers will soon launch Aquaris E4.5 Ubuntu Edition, the first Ubuntu smartphone that’s based on the company’s Aquaris E4.5 smartphone running Android 4.4. 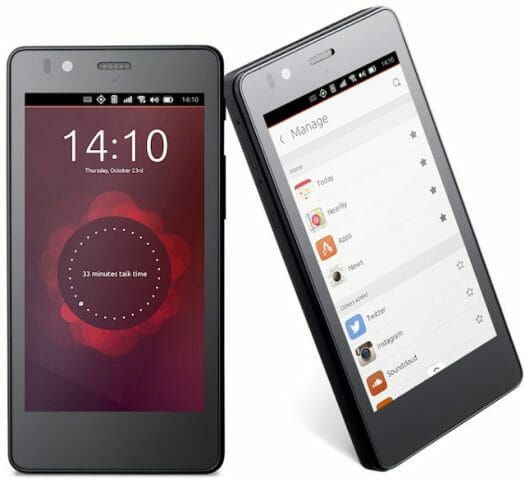 The Android version of the phone sells with a micro USB to USB cable, a power adapter and some documentation, and the company also provides documentation, firmware, and drivers & utilities on Aquaris E4.5 product page. Some source code is also available on github.

With that type of hardware, you can’t expect to get the phone / desktop convergence promised by Canonical, when they announced Ubuntu on phones and tablets. so I assume this will come a little later, maybe next year, with beefier hardware, and more work on the software front.

BQ and Canonical will also go with a limited launch at first, with flash sales in several countries in Europe, somewhat following the steps of OnePlus One without the invite system. Aquaris E4.5 Ubuntu Edition will cost 169.90 Euros, the same price as the Android version, and the exact time of the launch will be announced on Ubuntu and bqreaders Twitter accounts, as well as Ubuntu G+ and Ubuntu Facebook within the next week.

look at those bevel…

So… let’s see if I understand… This exact phone, Aquaris E4.5, Android version, has been selling on the BQ web store for 159€ during the holiday season. And now, the price has gone up to 169€! On my local Mediamarkt it is priced at 149€ since last november. Today still is, but the manager told me they will HAVE to change (the android version) earlier next week to match 169€. Very strange price politics from BQ! I know I will NEVER buy a phone from them… 😉 (in fact I will not buy/use Android phones at least until there’s a… Read more »

@JotaMG
They say they doesnt want to rise the price, but “their” factory is in china and all the transactions are made in dolars. The euro goes down, the price goes up. Thats why now is more expensive.

The source of the Ubuntu Edition can be found at http://people.canonical.com/~jhm/barajas/