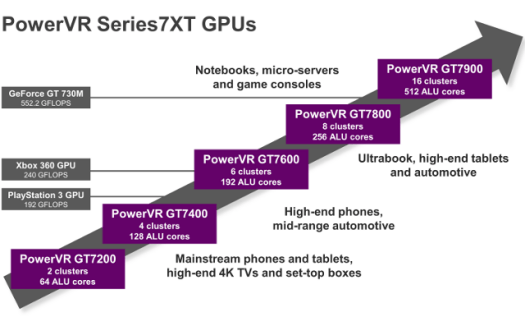 PowerVR GT7900 is still an embedded GPU with support for OpenGL ES 3.1 + AEP (Android Extension Pack) compatibility, full hardware support for tessellation and ASTC LDR and HDR texture compression standards. The new GPU delivers up to 800 GFLOPS (FP32) or 1.6 TFLOPS (FP16) graphics and compute performance at 800 MHz (using 16 nm FinFET+ manufacturing process), which compares to about 550 GFLOPS (FP32) for an Nvidia GeForce GT730M at comparable frequency. This is even more powerful than the Maxwell GPU found in Tegra X1 which delivers 1+ TFLOPS (FP16), although the Nvidia processor may have a lower power envelope.

Imagination Technologies did not disclose information regarding availability, but they may provide further details at the Game Developers Conference (GDC) 2015 and Mobile World Congress (MWC) 2015.

With PowerVR history of never releasing source or public documentation they don’t need to add any hardware. An unsupported shader is as little useful as 16. Who wants powerful efficient or cheap hardware that requires software which noone can trust, adapt or continue to use after an OS upgrade?
It will be news if they (imgtec and any partner) ever get complete sources out for a system running linux-libre with Gallium3D and no blobs. Or when they post detailed documentation of their hardware without NDAs.

@X Haha, whem that day comes I’m pretty sure Hell and all oceans and seas we have will freeze over. There’s just too many excuses why they can’t do this, just ask an Img representative and he’ll tell you. But we don’t make the SOCs but customers can adapt the sources but we’ll expose customer confidential data about the SOC but what if God gets angry at us for publishing some docs about our hardware ? Seriously they won’t do, they only way they will is if they’ve no choice but even then I’m sometimes afraid they’ll go bankrupt before… Read more »

Alex Voica (PR ImgTec) has been promoting ImgTec on Reddit for about a year. The response he got was “show me the software support”. Two months ago, he posted this, http://www.reddit.com/r/linux/comments/2ps5l3/the_state_of_open_source_drivers_for_mobile_and/ which shows that he is trying to make a case inside ImgTec for open drivers. Whether it works or not, remains to be seen. What is important is to pass the message that if a company wants to get market share, they need open drivers. I think that in terms of game theory, if a company delivers open drivers (thus have advantage over others), then the rest will follow… Read more »