STMicro announced their STM32F7 MCU family the same as ARM announced their latest ARM Cortex M7 core for high-end micro-controllers last September. Emcraft Systems have now launched a STM32F7 system-on-module with 32MB SDRAM and 16MB NOR flash, and ported uClinux to the platform. The company has also launched a STM32F7 starter kit for evaluation and development. Both target industrial automation, system and power management, wireless networking / sensors and other embedded applications. 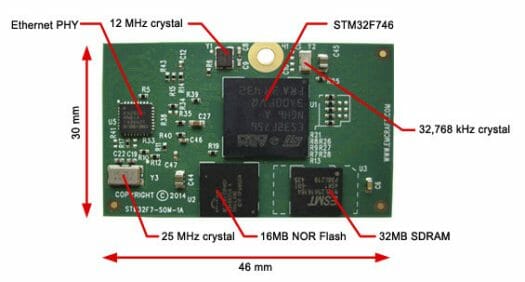 The company provides U-boot and uClinux 2.6.33 source code, binary images, and documentation for the module, as well as hardware documentation. 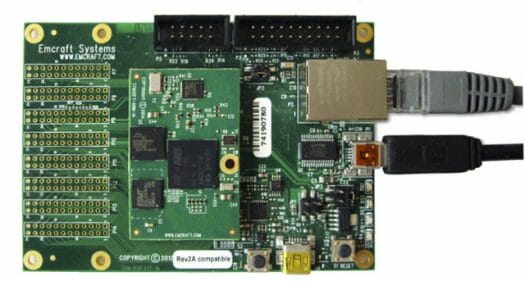 In order to quickly get started with the SoM, a starter kit (KIT-STM32F7-EXT) composed of STM32F7 SoM and SOM-BSB-EXT baseboard is also available with the following key features:

The baseboard is 100×70 mm in size and has the following main interfaces:

You can watch the demo showcasing fast boot to Qt (4s) and the performance of the system on a Qt based user interface, which is said to have greatly improved over STM32F4 thanks to ART accelerator and L1 cache in STM32F7.

The starter kit can be pre-ordered for $159, and the STM32F7 SoM sells for $27 per unit in 10K+ orders. Software and hardware documentation, and pre-order links are available on Emcraft’s STM32F7 SoM product page.

The company is also getting rid of stock of their older starter kits based on Microsemi SmartFusion (Cortex-M3 + FPGA) and NXP LPC1788 for $49.