After Orange Pi Plus development board powered by Allwinner H3 quad core cortex A7 processor, the company has decided to launch a lower cost version of their Allwinner H3 board with Orange Pi 2, that has started selling for a compelling $35 + about $4 shipping worldwide, and provides another sub-$50 alternative to Raspberry Pi 2, ODROID-C1, and Radxa Rock Lite boards. 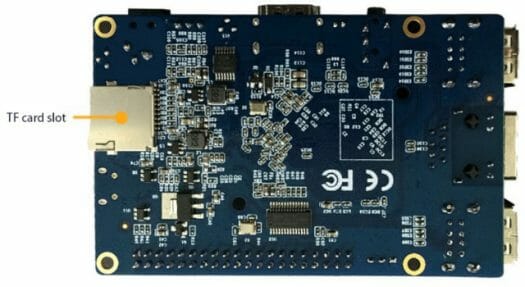 The cost savings compared to the $59 Orange Pi Plus have been achieved by removing the 8GB eMMC flash and SATA port, replacing Gigabit Ethernet by Fast Ethernet, and reducing the board dimensions. Allwinner H3 has the same ARM Cortex A7 cores as found as in BCM2836 processor used by Raspberry Pi 2, but if H3 is indeed clocked at 1.6GHz, Orange Pi 2 should be nearly 80% faster than RPi 2 when it comes to integer and floating-point performance. It also features a built-in Wi-Fi module that is lacking on both ODROID-C1 and RPi 2, so from an hardware prespective it’s certainly very good value for money. On the software front, the board runs Android 4.4.2, and Lubuntu, Debian and Raspbian images are being worked on, but I can’t find any Allwinner H3 images in the Download section of Orange Pi website, so I’m not sure how you are supposed to boot the board… I’d also expect a much lower level of support compared the Raspberry Pi, ODROID or even Radxa communities, so if you have a problem you might be mostly on your own.

Update: There’s also a version without Wi-Fi called Orange Pi mini 2 that sells for $33.99 including shipping.

I bought a C1 and I’m very pleased with it. I can stream Mkv full hd over samba to my tv without a glitch and C1 was using a java app with 300mb ram and CPU was at 20% use….
I’m not regretted about the money spent

0, Allwinner never opened access to cedar library which is for hw decoding of audio and video

And GPU is closed source blobs too with dubious and limited Linux support. Raspeberry Pi is still the best option and given that it will soon get an open source GPU driver there’s nothing that comes close to it for the price.

Too bad for the Gigabit eth removal. Also I don’t know if you need an antenna (There’s a tine socket next to the wifi chip). Also 1.6GHz x 4 may heat a lot … #anxious

I have not seen any independent benchmark results for Orange Pi and the seller on Aliexpress seems not to have shipped a huge number….

If the Plus now donwgrades to 100MHz LAN and drops SATA, I wonder for what purpose one should buy it regarding that pcDuino nano is available for approx 30€?

Waiting for the SDK release, or i will go with C1.

@Steven
Thanks. I’ve updated the post with that information.
But for people who buy the board now, where can they get the Android 4.4.2 image to flash to a micro SD card?
It’s quite important since it’s the only way to boot the board…

Despite some (probably regrettable) design shortcuts, these boards, when they work (!), they are good value for money.
Not good for a linux desktop experience, but great for servers or robotics.
And the people behind OrangePi are working hard to establish a community, and steven is a very responsive and supportive guy.

@jn
i think we can keep dreaming. It’s hardly that we are gonna’ see real linux suport

We will upload android image in two days. Because Google drive very slower in China.

>>> Not good for a linux desktop experience

How so ? the cpu is not powerful enough or is it the lack of good GPU acceleration ?

I can only talk about the Allwinner A20 boards. My OrangePi (A20) died on the second day (in part my fault), but because it is very similar to Cubieboard2/3 (A20), the “speed feeling” should be very similar, i.e. at 1920×1080, the desktop is useable except for browsing, in particular some websites with bad/intensive javascript and/or lots of images can slow down significantly. Things get a little better if you use a lower resolution. With the proper modules in place (mali, cedarx, etc) video hardware decoding works in Linux even at 1920×1080. Not perfect but works (I use Smplayer). For headless… Read more »

I dont see how this compares to C1 at all when even the Pi2 doesnt.
Odroid C1 is the best on this fight gents. On low cost development boards it outshines anything else.
Lets wait for 64bit era and see what brings

I am waiting for a Debian image to buy one of these. I may want to incorporate this into our product. Right now, we’re using the raspberry pi in spite of its lacklustre usb and ethernet performance…

@Steven
Get a decent VPS somewhere with a static file server, I hate those cheap hosting platforms where you cannot download files with wget.

No money for allwinner until they start being honest about the GPL. (yes I realise probably all the Chinese SoC makers are guilty but allwinner has been caught multiple times)

Good effort like the c-1.
Sadly, and begrudgingly, for general purpose use, the inferior rpi2 will always be superior just because of the community they have built up. Its miles ahead of everyone else and they don’t care if they have inferior hardware because they plan to milk every ounce of performance using their collective mental muscle.
I mean, they could launch a $60 kickstrater with non-obsolete hardware and sell 100000 plus units at the drop of a hat, but they prefer to go with their price point objective and we kepping buying from them

Wise comment!
Sadly, most of the chinese SoCs and board makers are sleeping.
When (and if) they wake up, probably will be too late.
Microsoft and Intel are busy doing they home work……………..
You all see latter this year.

– HDMI-CEC doesnt work out of the box, you will need to make some soldering… and then it will crash after a hundred messages.

– AAC 5.1, dts-hd and dolby truehd doesnt work, but they are supposed to be supported by the hardware.

– Gigabit ethernet: ok donwloading, 50% performance uploading because of the buffers.

Hello,
Does anybody try to install or build Kodi under Lubuntu on this board ?.
Thanks.

@agumonkey
Not if you add a Heatsink and Fan your O.K. Also Most Cell Phone and Tablet do not have Heatsink at 2.0 Ghz and they Run Fine – Derf

100M fast ethernet port is connected to the SoC directly or via a USB to ethernet converter ?

Orange Pi 2 mini costs more than R-Pi 2 including shipping (at least in india).

The fast Ethernet port is directly connected to the H3 CPU. My performance tests indicate that it is able to achieve almost 98 Mbps in speed tests. You can go for the Orange Pi Mini 2 ($25) or the Orange Pi PC ($15). Even with default shipping (China Post Registered Airmail), both cost substantially less than it will cost you to buy a Raspberry Pi and arrive in India in about a month. If you are in hurry, you can opt for Fedex shipping (+$31) and you will get it in about 5 days. You can see my review of… Read more »