Xiaomi Mi Box Mini is probably the smallest Android media player available so far. It integrates a 100-240V power supply, and only features a single HDMI output port, no micro SD slot, and no USB ports. Although the device is primarily targeting the Chinese market, with a Chinese user interface and CCC certification only, several Chinese e-retailers have started to offer it for $50 or less.  GearBest sells it for $42.98 with coupon MIBOX, and they’ve sent me a sample for review. Today, I’ll post some pictures of the device, before doing a review, including trying to switch to a user interface in English.

I’ve received the package via DHL, and for once I did not have pay custom duty or other tax.

On the back of the package, they listed some key features in Chinese, such as H.265 1080p video playback, quad core processor, hexa core GPU, 1GB RAM, 4GB flash, dual band Wi-Fi, Bluetooth 4.0, and DTS and Dolby support.

The package includes the media player, a Bluetooth remote control with a CR2032 battery (included), a long HDMI cable (1.5m), and a user’s manual entirely in Chinese. Gearbest also added an adapter for British sockets.

There’s no much to say about the device itself, except it’s tiny and feature a lonely HDMI port. The power pins are retractable.

You may watch the unboxing video if you please.

At this point, I would normally take out my toolset to try to open the enclosure, and check out the board(s). But Xiaomi made it very difficult to do so, and I did not manage to open it without risking breaking the case. Luckily, somebody has done it already, and the first picture clearly shows how they struggled to open it, breaking part of the case to open it. 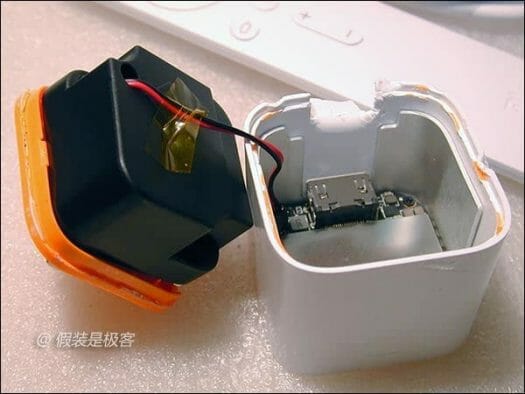 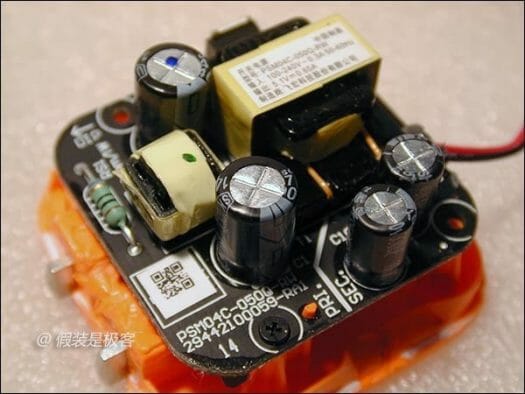 The mainboard with the Mediatek processor is nicely shielded on both side.

The top of the board features Mediatel MT8685A quad core Cortex A7 processor and two NANYA DDR3 chip to get 1GB RAM, as well as Mediatek MT6225N for Wi-Fi and Bluetooth, and maybe some other functions. 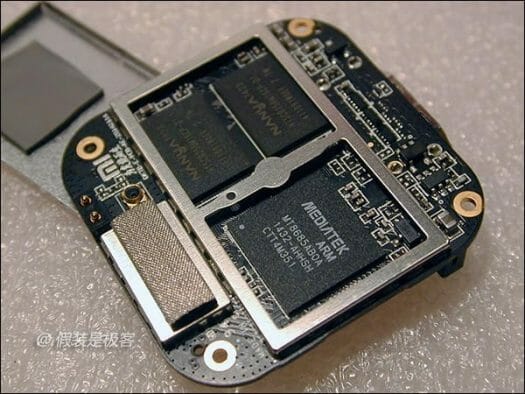 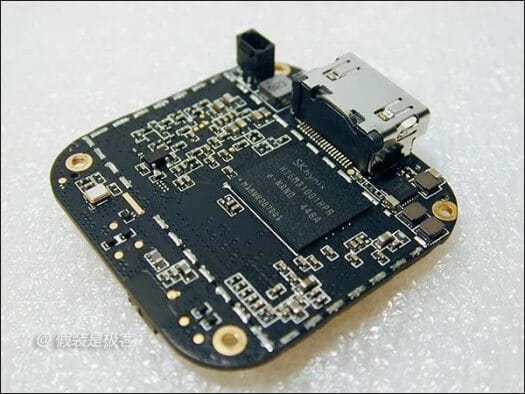 Beside having a hard-to-open case, I can’t see any obvious way to hack the device, for example connecting a UART console, or adding a USB port. The next step is to try options to switch the firmware or at least some apps to English, as the firmware is said to be entirely in Chinese only, before doing a full review.

I’d like to thank GearBest for sending a sample for review. They sell it  for $42.98 with coupon MIBOX, but there are also other options such as GeekBuying, Aliexpress, or eBay.

I wish there were a microSD card slot or a USB port.

Don’t see an obvious test point for UART … Might not be routed :-7

I hope for clones with USB and LAN = cute little servers

The MT8685A has support for SD Card, USB and Ethernet. They just aren’t exposed on this unit.

Has anyone located a datasheet for the MT8685? I want to check out what kind of audio support it has and there is not enough information available to tell.

Just another chip to add to my pile of ignored products while waiting to see a datasheet.

Can you verify if this is dual band? The Mediatek page for the MT8685 does not say dual band.

@Jon Smirl
The device can connect to my 5GHz router, so it’s definitely dual band.
There aren’t any info about MT6225N on the net, not sure why Mediatek don’t document all their chips…

@Jean-Luc Aufranc (CNXSoft) They do document there chips, they just don’t let other people have the documentation. I understand why places like Qualcomm/Marvell do that – if you won’t give those companies a PO for a million chips they don’t want you as a customer. But these Chinese companies are not like that, they want to sell their chips to everyone. So it makes no sense, they are copying Qualcomm (closed doc, few customers) while acting like TI/Freescale (open doc, many customers).

It seems there is an English conversion method already : https://www.youtube.com/watch?v=tyKe9F_mn14

@Gabe Have you seen any prices for those uStarCom boxes? I can’t find them for sale anywhere.

un-fused fire hazard. Period. These cheap 240v to 5v converters kill, and that psu is a cheap catch fire type converter, Can’t see a regulator so probably a cheap zener too, caps don’t look rated to 240v….140v that cap says. Should be 240V~ for EU. It says to me “cheap tat”.

@Jon Smirl
I think they are for chinese market only:
Here is a review in chinese:
http://ow.ly/L90v9
Here it says it’s around 40 Euros:
http://androidpc.es/blog/2015/01/12/utstarcom-el-tvbox-con-forma-de-huevo-y-soc-mtk8685-quad-core/
Some more links to same chipset boxes:
http://www.sz-dtech.com/en/productview.asp?id=319
http://www.uditech.com.cn/en/products.php?id=14

@boudy These boxes are not distributed in the EU, only in China. Xiaomi is a giant company, I’m sure they will get the proper EU certification if this box is distributed there. They will probably design a different PSU board for the EU and US.

There is a power supply controller chip on the other side of the PCB. Some kind of flyback design.

Could you pass your multimeter on those golden test points? Is there 3.3V on those pins?

@Gabe I wonder how the cost of this CPU set (CPU+external radio chip) compares to alternative CPU plus Ampak module. Alt+Ampak is about $9. If this chip set is ~$6 it is worth looking at. This Xiaomi mini box makes me think it is around $6.

Zoobab – the linked article says it is a 5V power supply. It looks like there is PMIC chip on the CPU PCB making the rest of the voltages.

@Jon Smirl
That UTStarcom company (not the large telco equipment company) lists products that never become available, or only to distributors.
I wrote about a Tegra K1 game console (http://www.cnx-software.com/2015/01/12/utstarcom-mc8718-is-a-funny-looking-tegra-k1-based-android-game-console/) allegedly announced in mid-2014, but I can’t find it anywhere for sale.

@zoobab
I have not opened it, and if I do so, I’d need to break the case. Maybe later…

i bought one two days ago from gearbest with coupon

@adem
If you want to try to change parts to English, do not perform the firmware upgrade (as I did), or the option that allows that will disappear…

I forgot to do a MAC address lookup with the Wi-Fi MAC.
The company is Beijing Duokan Technology Limited. The CEO also sits on Xiaomi’s board of directors.
http://bbs.xiaomi.cn/thread-9738398-1-1.html

It has no recovery button on the board, don’t try stupid things. It will brick.

Mediatek is a Taiwanese company, not Chinese…
Besides, you might see them as a company that makes cheap junk, but they’re in fact chasing the big boys and are very likely to overtake some of them within the next couple of years.

I just receive my ,two days ago,, and after updating to 1.3.87 ( I think ) i found my self in endless boot loop.
now there no way to hard reset no way to reflash the firmware so what to do?

I bought one from aliexpress and receive it in Brazil few weeks ago. It is really nice both the device and the remote control. The positive aspects for us, outside China, is finished… My device at least is in Chinese only. No setup available to change that to English. Only cumbersome methods to install other launchers or install apps via apk. After loosing many hours, I managed to connect to wifi, access my laptop and install netflix (via apk). Another disillusion. Important functions in the app are not accessible by the remote (like language, account, chapters navigation). As it no… Read more »

@Leandro
It’s just not a very good device outside of China and apps others than Xiaomi’s.
You’ll find more comments about frustrated users in the review @ http://www.cnx-software.com/2015/04/04/xiaomi-mi-box-mini-review/