Ugoos UM3 is another minic PC powered by Rockchip RK3288 SoC with 8GB storage, 2GB RAM. It has Wi-Fi, but no Ethernet, so it looks like the offspring between a full-sized TV box and an HDMI stick. The company sent me a sample for evaluation pre-loaded with a dual boot image with Android 4.4 & Ubuntu 14.10. I’ll start by unboxing, and opening the device, before testing the dual boot image another day.

The company sent me the device via DHL in a package for RK3066 / RK3188 devices, but I guess end-users will get an update package that will probably look similar. 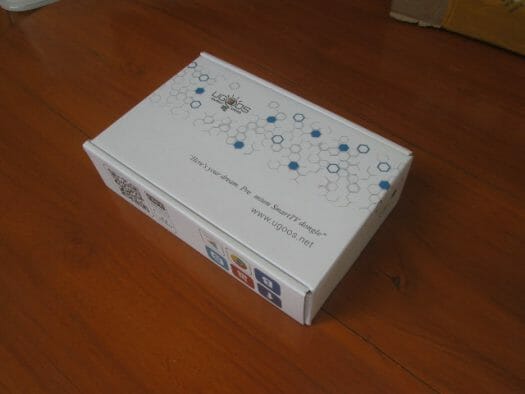 I was surprised how tiny the device was when I first took it out of the box, and with a black body and red cover, it’s probably the cutest too.

It comes with a 5V/2A power supply and corresponding USB to micro USB cable, HDMI and AV cables, an IR extension cable, an IR remote control requiring two AAA batteries (not included), and a user’s manual in English with some pictures of older Ugoos devices.

Looking at the device itself (did I say it looks really cool?), we’ll find a reset pihole, a Wi-Fi connector, micro SD card on the rear panel, an HDMI female port on one side, micro USB OTG/DC, AV port, and IR port on the other side, and two USB ports on the front panel.

A good looking device is good, but the most important is what’s inside, so I opened with a green plastic tool. It took me a little while to open it, but you just have to slide a thin and hard object between the red cover, and black casing to pop-up the cover.

I’ve also take a closer picture of the board to have a look at the components.

I’m not sure I’ll do my usual full review, but I’ll definitely shot a video with the Android and Lubuntu image, make temperature measurements, and verify stability under load (3D games, full movie playback).

If you plan to buy in quantities, you may want to check out Ugoos UM3 product page. Few shops currently sell to individuals, and I could only find it on Dealsprime for $109 including shipping, and on “Ugoosshop” for 124.95 Euros. [Update: GeekBuying now sells it for $129]

Any update on those temperatures?

@Joris W
It was an early device, and the final product comes with a heatsink as shown on the picture @ http://www.cnx-software.com/2014/12/10/ugoos-um3-review-android-ubuntu/