Several Chromebooks with Rockchip RK3288-C processor were launched last quarter, but most models come only with 2GB RAM, and other laptop with 4GB tend to cost over $200. But CTL has now announced CTL H4 Chromebook for Education also based on RK3288 and featuring 4GB RAM for just $199. 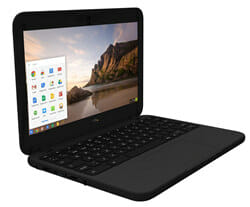 The laptop also comes with a carry handle, has a rugged design supporting drops up to 70cm, and its keyboard is water-resistant.

The laptop is designed for education, but it appears CTL also sells directly to individuals. As Liliputing notes the good news is that you don’t need to wait for H4 model to come out to get a $200 RK3288 Chromebook with 4GB RAM, as CTL J4 is now on sale for $199, and I’ve also noticed ASUS EeeBook C201PA-DS02 Chromebook with a similar configuration is also $50 off in newegg, for the same $199.99 price tag. Both these offers are US only, so if you’re outside the US, you’re probably out of luck, unless you use a forwarding service.

Exactly !
Too much ram for a slow cpu. And no USB3.
Clearly not a winner.

@JotaMG
With less than 4Go with modern systems/applications you will swap all the time, so your CPU will only wait for disk access…

I’m very impressed with RK3288 and how well it performs in Android…my RK3288 TV box is the most powerful ARM device I own, much stronger than my phone. Interested to see how this will handle a full Linux, or even better Android.

@Noloqoq
That depends. I have the first ChromeBook with Samsung Exynos and just 2GB of RAM. It works very well, but of course limited in usage since it’s ChromeOS. If you have full blown OS like Linux and 100 tabs in Firefox you will run of memory of course.