Rockchip RK3288 is one of the most popular platforms for TV boxes, and while most boxes are sold with Android OS, it can also run various Linux distributions with two main caveats: 2D/3D GPU acceleration, and hardware video decoding by the VPU. It appears the last two have been worked on, as yesterday, I got tipped that Kodi 14.2 Linux was running on Ugoos UT3 and Radxa Rock2 Square. 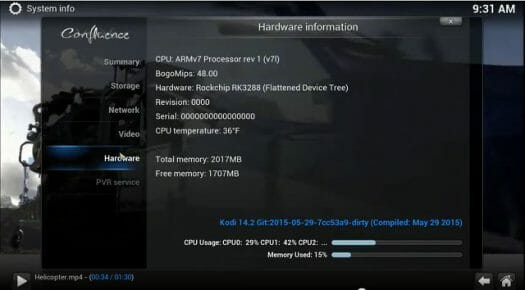 Since both hardware platforms showcased a Kodi port at the about same time, it’s probably safe to assume they use the same implementation (despite slightly different build dates May 29 vs June 6), which has been developed by “Marc” (or is it MAC?) using the Android libraries and libhybris for video decoding, raw2 device driver for 2D HW accelerated blitting and converting frames, and ARM OpenGL library, driver and examples, among other software packages.

So let’s check the demos starting with Kodi on Ubuntu 14.10 running in Ugoos UT3s.

The user interface (1920×1080) renders at around 25 to 35 fps while playing videos, and two 1080p videos are played smoothly with relatively low CPU usage.

The Radxa Rock2 video shows some of the shortcomings of the current port, as they also show 4K video playback including some HEVC/H.265 videos which do not play smoothly at all.

The user interface however renders at over 60 fps if videos are not playing, and the 1080p video tested played just fine.

Not everything is perfect yet, but at least it’s clearly a development in the right direction.

good news. I got a TV01 II RK3288, i wonder if i can install Linux on it?
Also, it heats up when i play games etc, is there any guide on how to open the case safely and install a heatsink?
Reply appreciated!

@m][sko
Can you provide some more info how to achieve that? I’m googling but would like to see some real world example.

Check out the release:
http://bitkistl.blogspot.co.at/2015/07/download-kodi-xbmc-for-rk3288-devices.html

for as long as I’ve had an android tv box xbmv and now kodi had never run smooth. I’ve poured over pages on how to fix this n that but it never played without buffering. considering i use fiber internet its not a speed issue and have had to use spmc ever since. is there any tips on changing the resolution down from 720 to like 360 as YouTube does. i dunt care bout crystal clear reception just no dropped frames and stuttering video. please. is it better if kodi is the only thing on the box? rk3066-3288 , all… Read more »

Additional info and links can be found here.. http://freaktab.com/forum/tv-player-support/rk3288-devices/512974-xbmc-kodi-on-linux-rk3288

And indirectly related…
For those interested, some work is being done to overcome some of the shortcomings reported by some RK3288 users. Involving some Rockchip-provided patches. See here….
http://freaktab.com/forum/tv-player-support/rk3288-devices/beelink-3288-devices/512544-finally-we-got-some-patches-from-rk-for-the-micro-stutter-and-hdmi-audio-problem-but-we-want-more-videos-to-verify