HummingBoard Edge SBC Gets an mSATA/M.2 Connector, an eMMC Flash, and More I/Os
Skip to content

SolidRun launched its HummingBoard family last year with a board with a form factor similar to the Raspberry Pi, but instead of using a Broadcom processor, the boards were based on Freescale i.MX6 single, dual or quad core processors. The company has recently introduce a higher end board with Hummingboard Edge that adds an M.2 connector, eMMC flash, 7 to 36V DC power input, more camera interfaces, a DSI interface, and more GPIOs. 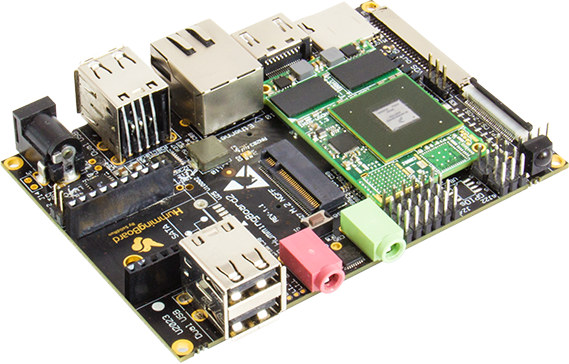 The following comparison table shows the differences between the new Hummingboard Edge, and the older HummingBoard Pro and Base boards.

The Edge board however loses the optical S/PDIF port found in the older models, is bigger, and supports Linux, but for some reasons not Android. The full list of supported OS can be found on the download page, although it’s not clearly at this stage which ones will run on HummingBoard Edge. A metal enclosure has also been designed for the board.

HummingBoard Edge can be pre-ordered now for $102 to $252 depending on options, with shipping scheduled for the end of August.  $102 will get you the baseboard with MicroSOM i1 module with i.MX6 Solo and 512MB RAM, but no power supply, no enclosure, and no wireless connectivity. The most expensive model will come with MicroSoM i4x4 with i.MX6 Quad, 4GB RAM, a Wi-Fi & Bluetooth Module, a power adapter, an 8GB micro SD card, and the metal enclosure.

Is it a real sata controller?

Yes. The dual and quad versions of the processor support SATA.

@AET
This is a open source hardware and firmware !