96Boards is an open hardware platform specification for 32-bit and 64-bit processors boards (64+32 = 96), but so far only 64-bit board have been launched or announced, and 32-bit boards were missing from the equation. Freescale will soon change that as they’ve partnered with Arrow Electronics on a 96Boards compliant board powered by Freescale i.MX7 Dual due to be released at the same time as i.MX7 enters mass production, which is scheduled for November 2015. 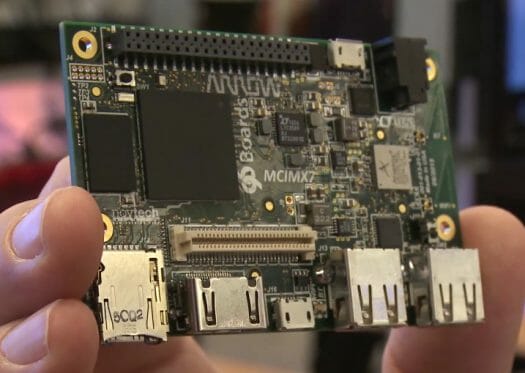 Freescale i.MX7 supports both Linux and Android, but the latter is probably limited since there’s no proper GPU, with only some 2D acceleration. I found out about the board in a video recently uploaded to YouTube by Freescale.

The board is expected by the end of the year, and no pricing information has been announced so far.

My two year old Cubietruck also has a dual Cortex-A7 1 GHz CPU.
And 2 GB of RAM, a Gigabit Ethernet port, and SATA.

@Ian – While you are correct, this particular Freescale design is not spectacular, 96Boards has been great for dramatically lowering the price on 64-bit ARM hardware. When we first wanted to offer 64-bit at miniNodes, only the AMD Opteron was available – and it was $3,000 each.

Is there anything i.mx7 can do which i.mx6 can’t – other than low power ?

Emm… this would have been great news 2-3 years ago … moving on.

Peter Bauer :
Is there anything i.mx7 can do which i.mx6 can’t – other than low power ?

Provide updated software over time, ensure the chip will be available for 10 or 15 years from the product launch:
http://www.freescale.com/webapp/sps/site/overview.jsp?code=PRDCT_LONGEVITY_HM
Really, embedded is different to consumer, and most of the ARM SOCs out there are for consumer.