Allo is a company based in Bangalore, India specializing in VoIP hardware solutions, but they’ve recently developed a single board board powered by Actions Semi S500 quad core processor that supports various Raspberry Pi HATs and can be used for multimedia, IoT, and Telecom application such as Asterix or Freeswitch PBX. 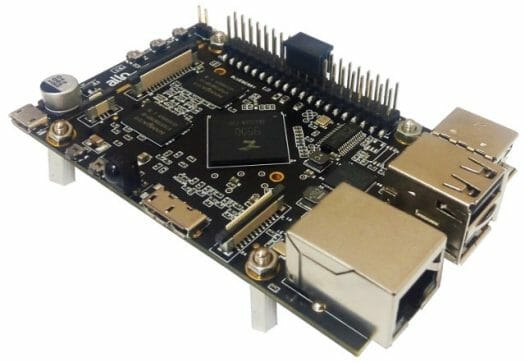 The board is said to support 5 operating systems namely Ubuntu 14, Arch Linux ARM, OpenELEC, Fedora and Android, and various applications have been ported to the board including Rune Audio, Kodi, Squeezebox, openCV, node.js and more.

The company has also developed several HAT compliant add-ons board for the board that can also be used on the latest Raspberry Pi models:

There are also some other add-on boards that are not HAT compatible such as the eMMC modules which are similar to what ODROID boards are using, a 5MP camera module with autofocus, and a 7″ LCD display (1024×600) with a touchpad.

Allo SPARKY single board computer will become available for less than $40 in two to three months but I could already find it on a website (in German) for 47.60 Euros including VAT. Eventually, more information about SPARK and add-on boards should be found on Allo products page, but in the meantime, you can check out Allo SPARKY brochure with an overview of the board and HAT compatible shields.

Doesn’t seem that they’ve got any info up on the page. I was very interested in this new set o’ toys they’re supposedly offering (Some projects could use the Sparky, some could use an RPi with their expansion boards…) but can’t find anything on their site.

agree. as i browse their product lineup. no card with 40pin gpio connector. want to try to chat with their support to find some info. but their support page seems to look like unfinished web template. anyway thx for the share. any of you hv experience with this brand ?

Any kernel source tree for Actions Semi?
That is the first thing we’re always looking for when new embedded linux platform has been come to a market!

They have nothing on their website, the only information they could give me is the product brochure.

There’s one actions semi 96boards in the works, so the source code should be there already or released a little later.

I think it was a preview dealer brochure, but very nice.

The “Lemon Pi Board” hast the same SOC and GPU.

Any info about the CPU frequency?

Hm. They removed Sparky pages from both websites.

The upcoming Allo Sparky has a large heatsink -> http://www.cnx-software.com/sparky_allo_heatsink/
and they told me the board could sustain high loads thanks to this.