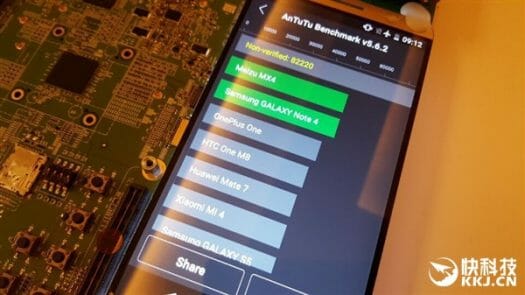 For reference the top 10 Antutu scores so far in 2015, only got as high as ~77,000 points fro Meizu Pro 5.  Since the benchmark was run on a reference, it’s possible the score will drop once it’s in a tighter package.

Some key features of Kirin 950 processors:

The company also mentioned that they decreased power consumption by up to 60 percent (compared to their processor using TSMC 28nm Process) thanks the 16nm FinFet+ manufacturing,  its new i5 co-processor that “consumes” 6.5 mA instead of 90 mA on the previous i3 co-processor, lower power consumption GPS (Fused Location Provider) and more.

Mali-T880 MP4 Only?? It’s nearly the same graphic power as Snapdragon 600’s Adreno 320 GPU!! As always, HiSillicon is clearly late about the graphics on high-end SoCs… I expected at least a MP6 version to at least compete with the Exynos 7420… Too bad, but it’s the sad habit of the Kirin SoCs…

950 in 96Board as an update for the HiKey board would be nice. Plus some more RAM.

@quillan
Thanks! However that link only shows a list of others posts… Maybe I should register to Weibo.