I’m quite interested in testing 64-bit ARM platform, but since mini PCs and development boards are not quite there yet, GearBest give me the opportunity to check out Iocean M6752 smartphone based on Mediatek MT6752 Octa core ARM Cortex 53 processor with 3GB RAM, 16GB flash, but running Antutu 4.4.4 (32-bit). Today, I’ll provide the complete specifications of the phone, take a few pictures, and run CPU-Z and Antutu benchmark, before writing a full review in one week or so.

The smartphone may have multiple versions with up 16 or 32GB storage, and 1, 2 or 3 GB RAM, but the one I received has the following specifications:

I’ve received the phone within a few days as it was shipped with DHL. 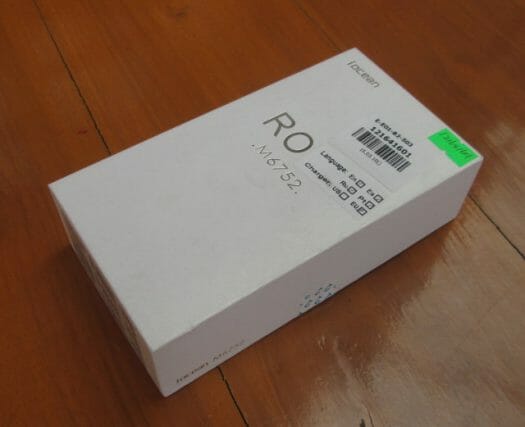 The package contains a power adapter, a warranty card, the phone, a blue 2,300 mAh battery, a plastic case, a screen protector, and a micro USB to USB cable for charging. GearBest also included a EU to US plug adapter separately.

The battery is not placed in the phone, and I also had to insert the micro SD card and SIM card, so I first had to take out the back over.

The micro SD slot in on the left, and the phone has two micro SIM slot, so I had to cut my full-sized SIM card to insert it in one of the slots. The battery still had about 50% charge I could boot the phone. 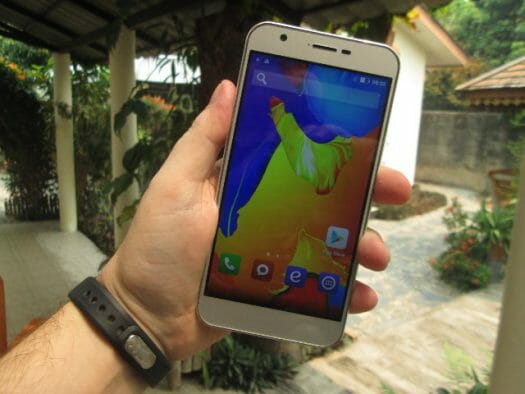 The headphone jack is on the top of the phone, the micro USB on the bottom, and power and volume buttons on the right side, and that’s all there is in terms of buttons or connectors. The phone feels really light in the hand, although it’s not particularly thin.

If you want a better look at the phone, you can watch the video below, where I also boot the phone and quickly flick through the user interface.

Boot time is quite impressive compared to my older phone (about 10 to 15 seconds).

The phone was set to English, and Google Play was pre-installed.

I’ve instaall Antutu, CPU-Z and Dropbox myself, but all other apps were pre-installed. SammyDress is a junk app trying to sell you woman clothes, and Z-DeviceTest just an application to get system details.

So far I haven’t found any issues with the phone, and the full HD display is sharp, and bright.

I have never tried a device with MTK6752 processor, or even a Cortex A53 based device before, so let’s extract some technical informations with CPU-Z first.

CPU-Z does list 8 CPUs, but somehow only reports 5 ARM Cortex A53 cores @ 468 MHZ to 1.69 GHz. It correctly detects a Mali-T760 GPU, 3GB RAM, 12.82GB internal storage (out of the 16GB eMMC flash). The model is M6752 with H560 board, and is said to be manufactured by OUSHENG. I found a company called Ningbo Ousheng Electric Appliances, but they don’t seem to be in the smartphone business at all, so they must be unrelated. All sensors appear to have been detected properly. The kernel is armv7l, so that confirm this 64-bit ARM platform runs a 32-bit Linux kernel.

That’s a pretty good score for a so-called mid range smartphone, just between Google Nexus 5 and Samsung Galaxy S5, especially Antutu does not complain about an unverified score.

I’ll have to run a few more benchmarks to confirm this good performance in the full review. I’ll use the phone mainly for browsing the web, checking email, watching YouTube videos, and playing casual games, but the rear and front camera will also be tested in bright and low light conditions, as well as battery life, video decoding capabilities, GPS performance with Running+ app. I’ll also report on potential issues I expericne with the phone, and you can let me know if you want me to test something in particular. The review should be similar to what I did for Infocus C2107 tablet, and I will only test Wi-Fi, not 3G or LTE connectivity.

I’d like to thanks GearBest for sending the smartphone for review, and if you interested you could consider purchasing the phone for $219.99 including shipping with Coupon “Iocean” via their online store. Other sellers include Tinydeal, Geekbuying, and Coolicool with price starting at $222.99.

@Sweet
Build quality? It looks fine to me, but usually the real test is over time, after a few months…

one thing i dont like abou the chineese phones is that they stop firmware updates within a year or so and battery performance dies after about 4 to 6 months.

@adem nacakli
Chinese phones are made to last.. for the time of review.
Now they are pretty good IMHO, but durability is an issue. Battery 6 to 12 months (not sure about branded phones like Samsung or HTC though), and I’ve mostly lost the cameras on my ThL phone after 9 months, my wife has lost full touchscreen after a little over two years.

I can’t remember ever getting a firmware update on any if the Chinese phones I bought/got.

@Jorge
Branded phones with these specs sell for $350-$500, so I could still understand people wanting to pay half price.
Warranty is always an issue when purchasing via Chinese online ship, even though normally you get at least 6 months.